Are Angelina Jolie And Brad Pitt The Next Will Smith And Jada Pinkett Smith? 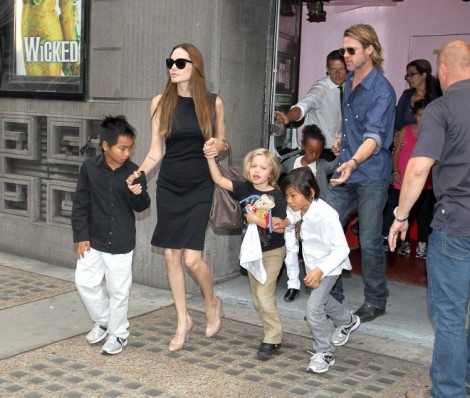 Last week we found out that Angelina Jolie and Brad Pitt’s daughter, Vivienne Jolie-Pitt landed her first role as a young Princess Aurora opposite her mother in Maleficent. I didn’t report on it at the time because I didn’t really care and it wasn’t a big deal. They needed a blond, cherubic baby and Angelina had one to farm out. Besides, it’s not the first time Brad and Angelina have loaned their kids out for a role. In 2008 Shiloh Jolie-Pitt made a cameo as Brad’s daughter in The Curious Case of Benjamin Button. The kid was going to be on set anyway, why not throw her in a shot. The director probably got her for free so it was a win/win.

But now the other Jolie-Pitt kids have gotten the acting bug. A source told Female First magazine: “Ange thought it would be a fun experience for her and Viv to share, and Viv is a natural. The other kids are now nagging Ange and Brad to land them roles.”

The Jolie-Pitt kids acting? It would be like a modern day Von Trapp family! I won’t even remark on the blatant nepotism because that will only make me furious. Those damn kids can’t be handed careers! But I will compare this Hollywood family to another who has allowed their kids to follow in their footsteps and is actively helping them do it. Will Smith and Jada Pinkett Smith have not been shy about their efforts to catapult Willow and Jaden Smith to stardom. Oddly enough, they both started their careers starring with their dad in big budget movies including I Am Legend and The Pursuit of Happyness. They have each went on to helm careers of their own. Willow has her hair-whipping music thing going on and is rumored to star in the new Annie remake and Jaden made a killing with that Karate Kid nonsense and has more in the pipeline. Will and Jada have come under fire as high class stage parents but they’ve always defended themselves by saying they’ve never pushed their children into the spotlight. Their kids are hungry for this lifestyle so Will and Jada are using their power to make it happen for them. I don’t have children (so roll your eyes at any time) but I have a problem with children getting what they want at a young age. True, the Smith kids have to work to achieve success like anyone else but one might argue they don’t have to work as hard as some other tween climbing up the entertainment ladder.

But this is really all besides the point. I want to know if you think Angelina and Brad would placate their children’s celebrity desires as Will and Jada have. I actually think if the Jolie-Pitts kids went into entertainment their parents would feel like they failed. Sure they say they just want their kids to be happy blah blah blah, but Angelina must have something a little more highbrow in mind. Why else teach them all those languages and inject culture into their brains like jelly donuts ready to burst? Angelina and Brad like to comment that they only make movies so they can afford their other pursuits such as architecture and do-gooder stuff. Can you imagine Angelina accompanying Zahara to her first premiere, watching from the wings as Z beams from all the attention and giggles through her first red carpet interview? Ah, I can see the veins popping out from her arms!

But it could happen, right?  That’s what happens when you have a big family. Every kid needs to differentiate from the other. Everyone needs to stand out. Big families breed big personalities but celebrity families also breed egos. If everyone is always telling you you’re special, it must be so! Despite Angelina and Brad’s intentions, they have  a lot of damn kids and one of them will probably throw their hat into the circus ring. And Brad being Brad will want to help them out. But will he go full out Will Smith style, producing and manipulating behind the scenes? Or will he go the Susan Sarandon/Tom Hanks route and support from a distance?

It’s an interesting situation. Will Brad and Angelina support or try to hold back? Will they encourage formal education or the school of hard knocks? Will and Jada put their careers on hold to watch their children’s careers grow. Would Angelina be able to play second fiddle? I’m anxious to see how this goes down. I always thought we’d have to wait until those Jolie-Pitt kids were in their teens before they started rocking the boat but it looks like it might happen much sooner! Are Brad and Angie ready to deal?