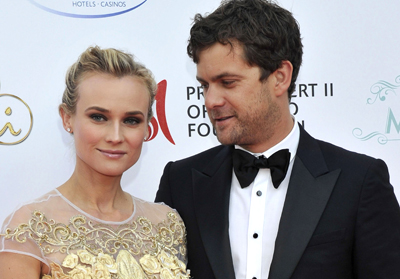 Is there another celebrity power couple wedding on the horizon?

Joshua Jackson (aka Pacey Witter for Dawson’s Creek fans) is reported to have popped the question to his long-time lady love, Diane Kruger.

According to People Magazine, the couple, who have been together since 2006, were at a benefit dinner in Monte Carlo recently, alongside Prince Albert and Bill Clinton, where Josh splashed out $45,000 to win a rose gold necklace with 1.7 carats of white diamonds for Diane.

Supposedly, Josh, 33, was overheard telling his tablemates that it was an engagement gift for the 35-year-old actress, who was previously married to Marion Cotillard‘s French baby daddy, Guillaume Canet.

However, according to sources close to the couple, the engagement rumors aren’t true, which would explain why Diane hasn’t been rocking a shiny, new diamond ring at any events recently.

Still, could the couple be trying to keep their engagement under wraps? Perhaps, they will put a Natalie Portman and have a secret wedding sometime later this year. Related: Natalie Portman Is Pregnant And Getting Married