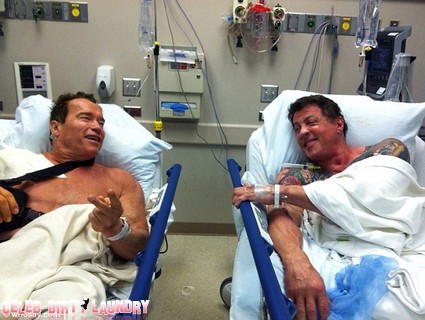 Arnold Schwarzenegger and Sylvester Stallone posed for an unusual picture yesterday – side-by-side in hospital beds awaiting shoulder surgery. The two superstars have had more cosmetic surgery and taken more anabolic steroids between them then the combination of The Real Housewives of Beverly Hills and the competitors at last years Mr. Olympia contest. Sporting dyed and supplemented hair and artificially preserved and boosted faces and bodies the two looked ridiculous and a bit scary.

Together they are 129 years old – two senior citizens – and much as they try their best to hide the fact, they look it. Imagine how silly Hollywood has become – allowing these two old men to pretend to be action heroes? Of course if we didn’t patronize their stupid films then they would just go away – or at least stop making movies and head straight to DWTS.

Arnold posted the pic yesterday along with following caption:  “After all the action, stunts & physical abuse shooting ‘The Expendables 2’ and ‘The Last Stand,’ it was time for a little tune up on my shoulder. Look who was coincidentally waiting in line behind me for his shoulder surgery.  Now we’re ready for another round of great times and action when we shoot ‘The Tomb.'”

I remember when Arnold was the best bodybuilder in the world – he inspired millions of people to take up bodybuilding and weight training – he was an idol and an icon. Stallone made ‘Rocky’ and again, millions were inspired by his classic story of persistence and redemption. Now these two former greats are pimping themselves out. There is nothing wrong with growing old gracefully. Do it guys.