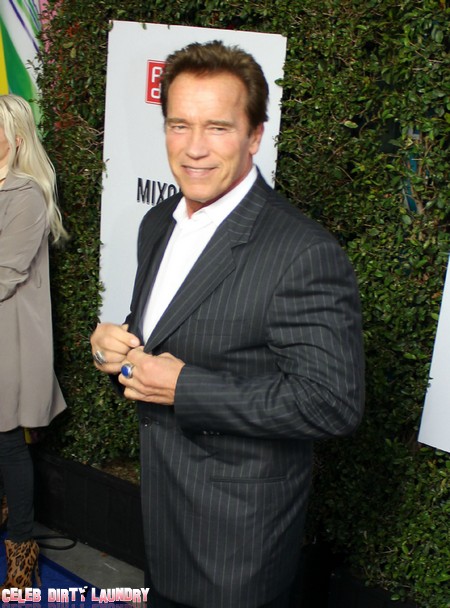 Arnold Schwarzenegger has given up hope that he can remain married to Maria Shriver.  Sources close to Arnold have revealed that he is ready, willing, and able to accept defeat and let Maria go.  The estranged couple and their lawyers have almost completed their work on reaching a financial settlement and sources say they are almost at an agreement.

Arnold made a big show about trying to get Maria back after she filed for divorce but I think that was mostly to keep the financial negotiations on a friendly basis.  Arnold is worth over $400 million dollars which is several times the amount of Maria’s wealth.  If Maria instructs her legal team to play hardball with the cheating ex-governor then Arnold stands to lose hundreds of millions of dollars.  So it is very typically Machiavellian for Arnold to act as if he is still in love Maria and wants to stay married.  We suspect that all he is doing is trying to protect his assets.

Arnold had a child with another woman, Maria’s housekeeper, Mildred Baena many years before Maria found out.  Arnold lied to his wife, family, and the world in order to preserve his reputation and position – can you imagine how the voters of California would have reacted if they had had proof of what a cheating snake their governor was?   Do you think they would have re-elected the bum?  Arnold is a proven liar and manipulator – both on a personal and professional basis – he misled the voters of California with a straight face for years!

TMZ exclusively reports:  Arnold Schwarzenegger would like Maria Shriver to take him back, but he’s not holding out hope and is at peace with the likely end of his marriage … sources very close to the actor tell TMZ.

As TMZ first reported, Maria has waffled on divorcing her hubby, partly because he still has a strong emotional hold on her and partly because divorce runs counter to her religion.  But we’re told as time passes and both Arnold and Maria have created separate lives, divorce is looking more certain.

We’re told Arnold believes Maria’s friends have done everything they can to poison the waters, imploring Maria to stay clear of him.  And our sources say Arnold and Maria are already “very close” in working out a financial settlement.

RELATED: Arnold’s Tell-All Autobiography –Would You Trust It?

Maria – do yourself a favor and divorce the creep.  What do you think of Arnold?  Is he not one of the most disgusting celebs ever?  Sound off in the comments below.