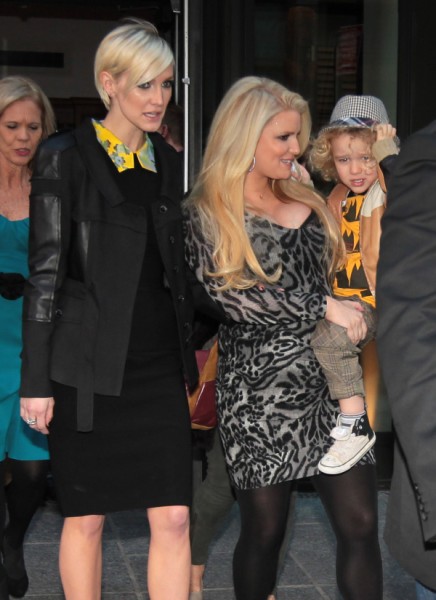 It appears Jessica Simpson hasn’t just disappointed her fans and the Weight Watcher people in her bid to lose the weight since giving birth six months ago. Ashlee Simpson is also fed up with Jessica’s b-tching and is freezing her big sister out.

“They used to be close friends as well as sisters, but Jessica Simpson and her younger sibling Ashlee are barely on speaking terms these days,” reports OK! magazine. “She moaned to Ashlee about [the weight loss] and when Ashlee showed very little sympathy for her, Jess lost it,” adding that Ashlee believes Jessica “only has herself to blame” for her weight issues.

Well? It’s true! You can’t eat buttered pop tarts and mac and cheese everyday for breakfast, not work out and still expect miracles.  Besides, that’s what lap bands are for!

But true to form, Jessica just doesn’t understand why someone would ever be mean to her especially since she sits around and does nothing – I mean, nothing wrong. “She was devastated and hit back, saying Ashlee is jealous of the attention she gets. It turned into a massive fight. Ashlee used to feel like they were friends. They would party together, but ever since Jess decided to have a baby, she’s way more straight-laced. It’s alienated Ashlee,” the source continued.

Whatever source! Ashlee’s doing just fine. She’s dating Lucky Luciano from Boardwalk Empire! Life is good for Ashlee. If she’s disappointed with her sister for any reason it’s because she’s still with her jobless, cheater(?) of a baby daddy Eric Johnson. Ashlee should have stepped in and slapped the sh-t out of her sister when that was going on and then stole the pop tarts as she made her hasty exit. That would have really showed she cared. But we all know how that ended up.

I’m giving Ashlee a pass on this one because I really like her current hair cut AND if you can’t tell your own sister to stop b-tching and get her ass on the treadmill, who can you tell? Do you believe the  Ashlee and Jessica  fight has to do with weight? Or is  Ashlee Simpson feuding with Jessica Simpson because she’s wasting her time with Johnson? The Simpson girls already have Pete Wentz. Do they need another has-been baby daddy?