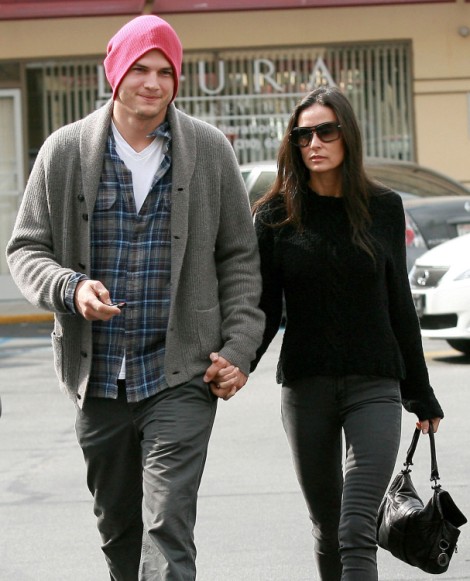 The couple were married in 2005 but broke up six years later allegedly because Ashton cheated with a much younger blond. I’m confused by this whole thing because Demi said back in 2011 that she was going to file but apparently couldn’t get around to it this year. Is it a big deal to know who files first? It shouldn’t be but don’t you always think the person who wants out of the marriage gets the head jump on the filing? Did Ashton tell Demi she could be the one to save face and do it last year but since she shuffled her feet he just went over her head? Or is this something they discussed together? Filing four days before Christmas? That doesn’t sound like a joint decision, does it? That sounds like a “I’ve given you over a year to make this happen your way but now it’s my turn” type of thing.

Could this be Mila Kunis’ Christmas gift? Because I’m not so sure it’s Demi’s with her crazy love life right now. Still, this could be the best thing for her. Between the drama with her kids and her boy toys, 2012 wasn’t the best year for Demi Moore. 2013 can ONLY get better. Demi needs to get down to Mexico for New Years. She needs to wear a hot bikini and over a trough of Margaritas make a resolution that 2013 will be a rebuilding year. No more dating 20-year-olds, no more dressing like you just walked into Urban Outfitters, no more feeling sorry for yourself!

Side note: Radar just posted a story about how Demi’s friends are worried she’ll relapse over the holidays because she’s so sad and lonely. Knock that shit off Demi! You’ve got 10 days until a new year. Clean up the PR!

Why did Ashton Kutcher file for divorce so close to Christmas? Is this a d-ck move or should Demi have seen it coming?