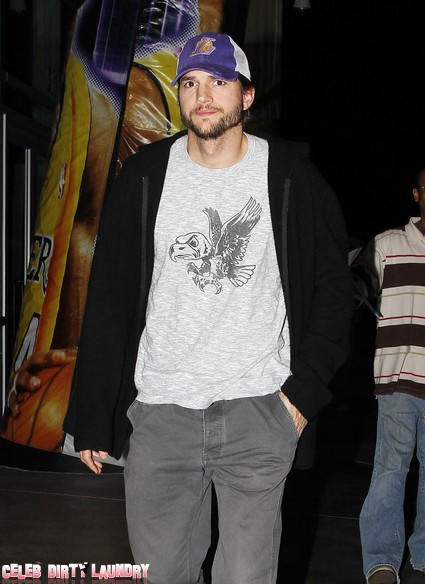 While Demi Moore struggles to regain her sanity in rehab Ashton Kutcher is coldly stalking Halle Berry. Ashton has a taste for older women and since being dumped by Demi after driving her mad, the Lothario has trained his sights on Halle. Ashton is so conceited as to ignore the fact that Halle is already hooked up with French star Olivier Martiniez. After all, who could refuse the amorous advances of Ashton Kutcher!

But sources warn that Bruce Willis is never going to allow Ashton to score with Halle. Apparently Bruce and Halle are friends and Brucey seems to blame Ashton for putting Demi in the bughouse.

The National Enquirer reports on Ashton’s pursuit of Halle, who they refer to as a ‘cougar.’ If Madonna and Demi are cougars then Halle is merely a housecat:  Fresh from his split with DEMI MOORE, ASHTON KUTCHER is hot on the stiletto heels of yet another cougar HALLE BERRY.

And friends say that the 34-year-old “Two and a Half Men” star isn’t put off by the fact that Halle, 45, is al­ready in a commit­ted relationship.  “Ashton has known Halle for quite a while, and I’ve heard him say more than once, ‘Man, if I was single…’ ” re­called one pal. “Now that he is single again, he’d give his eye­teeth to act on his crush.”

Ashton and Halle’s friendship dates back to 2003 when he played a prank on her as part of his “Punk’d” TV show – barring her from attending the premiere of her own movie “Gothika.” They continued to meet up at several Hollywood events and co-starred in “New Year’s Eve.”  But there’s a big hurdle for the actor to clear before getting to Halle, who has a nearly 4-year-old daughter, Nahla, with her ex-beau Gabriel Aubry, 36.

She’s been in a relationship with hunky French thesp Olivier Martinez, 46, since 2010.  “But Ashton has a big ego and seems oblivi­ous that she’s already with somebody.  Ironically, Demi’s protective ex-husband Bruce Willis is also a good friend of Halle’s.  If he gets a whiff that Ashton is after Halle, he’s going to tell her, ‘Stay away from THAT creep!’ ” said a source.