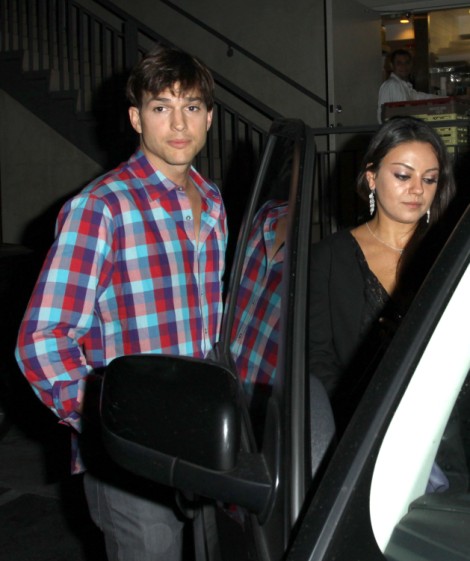 The Daily Mail has pictures of Mila Kunis and Ashton Kutcher making out all over NYC today. I shuffled through them because I’m continually fascinated by this couple. I don’t get them. I just don’t get them. And you won’t get them either after you check out the photos. Trust.

When you’re Mila Kunis, you shouldn’t have to work so hard to get attention from a guy. I know at the end of the day Mila is just any other girl, but she’s also a celebrity, and in my mind that means her boyfriend should throw himself at her feet – especially when that boyfriend is Ashton Kutcher. Instead, he’s being a major douche! Check it out. She’s practically shoving her lips in his range hoping that he’ll grace her with some TLC. I tried giving him the benefit of the doubt first. Ashton’s a huge sports fan so I figured the pictures must have been taken on Sunday when all the football games were on. He was probably checking scores and his fantasy leagues. But the pics weren’t snapped on Sunday. They were taken today. No excuse!

And I’m getting this weird vibe from Mila now. She’s is love with him. Gross. She’s like infatuated. She wants to have like 10,000 of his babies and he’s clearly calling all the shots. You can tell. Look at Ashton’s body language – very standoffish, very aloof. Mila has to initiate; she has to go to him to get the attention. Whoever thought Mila would be like that? I sure as hell didn’t! Maybe I’m projecting too much of her Black Swan character on to her but I thought Mila was cool and in control but these pics make her out to be a lovesick school girl grasping for crumbs from the assho-le quarterback. How does Ashton do this? He doesn’t just get kick ass chicks. He gets kick ass chicks and makes them lose their sh-t with him. We need to make up some Save Mila T-shirts fast because this nonsense has to stop! Mila has to see the error in her ways because I just do not see this ending well. It’s true a picture is worth a thousand words but in this case I only need one… trouble.

What do you think about Mila and Ashton’s behavior while out in NYC? Are Mila and Ashton moving too fast? Naturally I’m photo-judging but does it look like Mila’s fallen too hard?