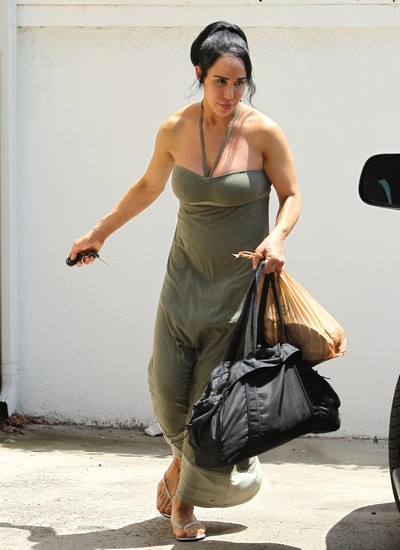 Octomom Nadya Suleman has quit her job at a Florida strip club before taking off a single piece of clothing after she was verbally attacked and insulted by her fellow employees.  Showing a rare bit of good sense Octomom decided to cancel her contract to do topless striptease shows at T’s Lounge in Palm Beach in July.  Octo’s representative, Gina Rodriguez, told TMZ that the decision to pull out of the deal was based on employees at T’s Lounge insulting her client.  Who knew Octo was so sensitive?

It seems the trash talk got to be too much for Octo when a bartender at T’s gave an interview in which he said that Octo was forced to strip to feed her many kids and that she was crazy to have had so many in the first place.  Even worse was when a manager at the dive club suggested that for the right price Octomom would do just about anything – including strip naked and perform lap dances.

TMZ Exclusive:  Octomom will not be coming to the stage of a Florida strip joint — TMZ has learned she’s canceling her stripper gig because she thinks club staffers are talking smack about her.  As TMZ first reported, Octomom was set to drop her top (and only her top) at T’s Lounge in Palm Beach, FL next month — but Octo’s rep Gina Rodriguez tells TMZ they pulled out of the deal this morning.

Rodriguez says the straw that broke Octo’s back was a local news interview with a club bartender who said, Octo has “a lot of mouths to feed so it was only a matter of time” before she started stripping. The bartender added, “She must be a little crazy, normal people don’t have that many children.”

We’re told Octo, aka Nadya Suleman, was also pissed about a manager at the club insinuating she might go fully nude and do lap dances … for the right price.

We are heartened by Octomom’s decision not to strip. Getting paid to take off one’s clothing is intrinsically degrading and we are glad that the trash talk that reached Octo’s ears helped her to realize this.  How many parents would wish for their dear children to grow up to be strippers?  And how many children would be proud to see their parent up on stage with their clothing off surrounded by drunken hooligans cheering or jeering.