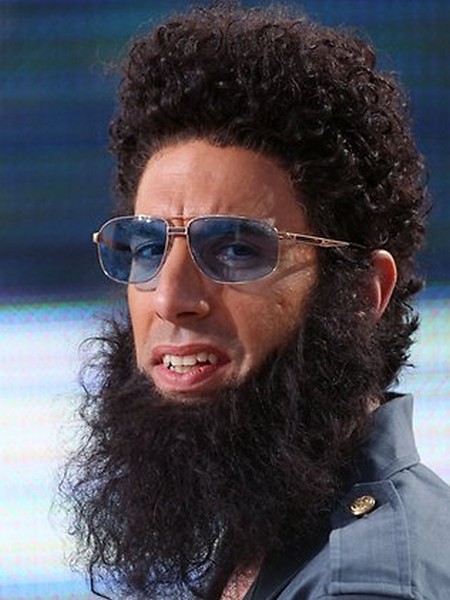 Sacha Baron Cohen was nearly bludgeoned to death by his chosen people. The Dictator star known for antagonizing men and women of every creed and color said he was chased by a gang of rock-wielding “Hasidic nutcases” while filming scenes for his movie, Bruno, in Jerusalem, Israel in 2009. Apparently his interpretation of traditional Jewish Orthodox garb, which included hot pants and a sleeveless shirt, didn’t sit well with the natives.

“A bunch of Hasidic Jews ran after me with rocks and I ended up hiding in a bathroom store,” Sacha recalled to The Mirror.“Normally in dangerous situations I have a getaway car. But as I ran towards the getaway car it drove away. So I found myself running down the street, running for my life, and being chased by these Hasidic nutcases. I turned round to calm them down, and I shouted in Hebrew ‘I am Jewish’, which apparently is the worst thing ever you can tell Hasidic Jews. It was then they decided that they wanted to really kill me. In those last two movies there were lots of people with guns who got angry and it became a little hairy at times. I never felt I’d get killed but it has been close.”

This time around for his role as General Aladeen, Sacha is doing most of the killing. Earlier this week, in front of crowds of people on his boat at the Cannes Film Festival, Sacha killed George Clooney’s ex-girlfriend, ElisabettaCanalis, and tossed her overboard in a body bag.

There are rumblings that Sacha’s latest character is perpetuating a negative stereotype of Arabs but he hasn’t mentioned any death threats yet. I think the only person who really wants to kill General Aladeen is Ryan Seacrest. Ryan threw a hissy fit when Sacha in full character dropped ashes all over Ryan’s suit at last year’s Oscars. I don’t know why Ryan’s still so upset. Sacha told Ann Curry he sent Ryan a new jacket… of course it did have a label inside that read “Made by Slave Child Labor.” Sacha was disappointed by Ryan’s ungrateful behavior. “He didn’t even send me a thank-you note. Unbelievable.”