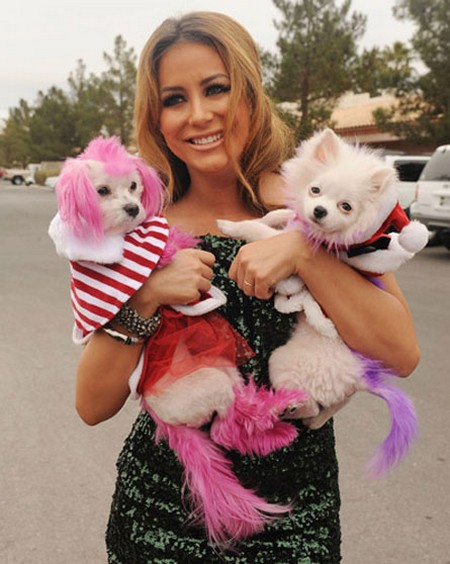 There is no doubt that Aubrey O’Day is a ‘headcase’ and if you watched just one episode of Celebrity Apprentice, this would come as no surprise to you. Aubrey not only acted like the biggest slut ever on reality TV when she suggested she did a penis inspection on former talk show host, Arsenio Hall, but she also trash talked and threw a slew racial slurs at him.

Aubrey’s behaviour on Donald Trump’s reality show, Celebrity Apprentice, no doubt made a lot of people question her mental health and now a doctor has actually confirmed it in writing; Aubrey O’Day has “mental health issues.” The former Danity Kane member appears to require “emotional support” when she flies first class and what does this support require? It requires her to bring her two dogs and they are registered “emotional support animals” from her doctor.

TMZ reports that according to Virgin America, they require all passengers to supply them with a letter from a licensed mental health professional for any animal to be able to fly in the cabin. Furthermore, the letter must say that the passenger “has a mental health-related disability“. Well, when you think of it, Aubrey had outrageous Lisa Lampanelli for support on Celebrity Apprentice and personally, I don’t find there really is much difference between Lisa and a dog. Oh wait, the dog is cute.

The exact reason for Aubrey being diagnosed with having mental health issues from her doctor has yet to be determined – but Aubrey O’Day mentally ill is like Kris Humphries cuckolded.