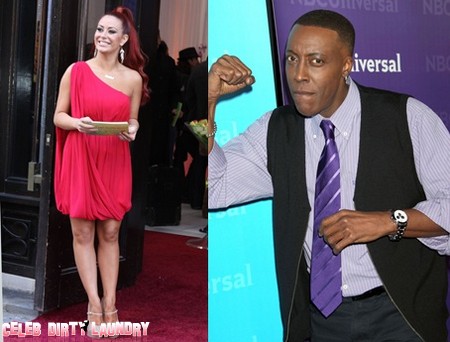 Aubrey O’Day is probably the ‘most hated’ Celebrity Apprentice ever – she has proven to be an overbearing bitch and acts like a whore. So why is she still on the show? Ratings, plain and simple. This week the arrogant twit called herself a “mini Trump” because, as she said it, she took the “bulls by the horns” and came up with everything on the task.

Did you see the episode, if you missed it, you can read the recap HERE.  Well, she won the task last week, which was a display for Donald Trump’s new cologne, “Success”, but guess what? Trump didn’t like it, so the bitch is not in fact a “mini Trump” is she?

A few weeks ago when Aubrey was leaving the boardroom, she put her arm around Paul Teutel Sr. and called him “daddy“, to which he replied, “Daddy’s going to spank you” and they all laughed.  Aubrey is 28 years old and Paul is 62, her calling him daddy and his promising to spank her is just “wrong” and “disturbing.”

Then this week, Aubrey is presenting Trump’s “Success” display when she turns to Arsenio and asks him to explain success to the executives because, as she said it, “the last time I checked you were a man”. Wow, what did she do, spy on Arsenio and do a penis investigation? Well that is exactly what Arsenio thought when she made that comment.

Point proven, whore!  If you want to vote in our Team Aubrey/Team Arsenio Poll Click Here