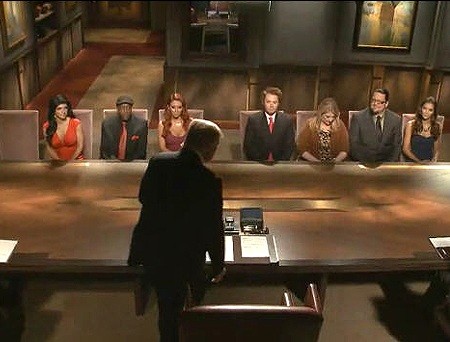 The Celebrity Apprentice returns tonight to NBC with a whole new episode called ‘Winning by a Nose.’  Stand by as we live blog the episode with all the up-to-the-minute details.

There is only one way to describe Celebrity Apprentice this season and that is drama, drama and more drama.  Each week Lisa Lampanelli has another celeb on her hit list.  Two week’s ago she claimed during the boardroom she had misunderstood Dayana.  But last week she went after Dayana again and claimed she was useless.  Penn had the best thing to say about the situation – he feels Lisa is jealous because Dayana is so beautiful and I would agree. What do you think?

Also this season it appears that Donald is making sure to keep his favorites around for a long time.  Seriously, Lisa and Dayana should have gone a long time ago. He has been getting rid of the contestants he feels threaten his favorites.  On last week’s episode Paul Teutel, Sr. was the project manager and his team lost.  He decided to bring Aubrey and Teresa back to the boardroom.  Donald felt Paul should have brought Arsenio back and not Aubrey.  Consequently, he fired Paul!  Did you watch the episode?  We did and we recapped it here for you!

On this week’s episode Donald Trump invites the celebrities to his luxurious penthouse apartment, where he gives them their next task, to create an in-store display for his new fragrance, “Success.” A rematch between two sparring Project Managers ensues, as they compete to win $100,000 for their charities. One team worries about an indecisive leader. The other team’s Project Manager sells out their team to Eric Trump. In the end, The Donald fires another celebrity. Boardroom advisors: George Ross and Eric Trump.

If you want to read MAJOR SPOILERS about tonight’s episode go HERE!  You have been warned, they are major!

TONIGHT’S RECAP: The celebrities are waiting to see who got voted out and while waiting, Lisa promises not to pick on Dayana this round. (I doubt the bitch will keep her promise)

Lisa gets her donation for her charity, it’s the Gay Men’s Health Crisis and she has a cheque for $20,000.00. The celebrities meet with Trump in his apartment in Trump tower. Trump tells them that he has had a long time relationship with Macy’s and he will be launching his new fragrance, “Success” with them. For the task they have to create and in-store display and slogan for “Success”. The Advisors this week will be Eric and George. Teams have to choose their Project Managers, Clay volunteers to be the PM for Unanimous and Aubrey decides to battle against Clay again as PM for team Forte. Trump advises them that the winning team will win $20,0000, but if they really “wow” him, it will be $100,000.00.

On team Forte, Penn comes up with an idea right away and Clay is wondering why he didn’t choose to be PM. Dayana’s ideas were a little more sexual, but Clay doesn’t think it is right for this task. Penn comes up with the slogan, “you earned it”. Clay is getting annoyed with Penn, because he pushes his ideas forward and doesn’t allow anyone else to put their ideas in when they are brainstorming.

On team Unanimous, Aubrey is in full charge delegating tasks. Arsenio comes up with a slogan, “The definition of success is liquid money”. Aubrey turns it down, it is too simple and obvious and she wants to do something fresh, not bling bling. Aubrey is still working on the slogan, Theresa has ideas as well but Aubrey shoots them all down. Arsenio finds something online where Trump said “trust your instincts”, Aubrey jumps on it right away and grabs the idea and takes credit for the slogan.

The executive for Macy’s and the Trump organization meet with team Unanimous. The women tell them that although women do buy more fragrances, they have a strong male clientele. At Forte, the executives try to give them some pointers, but Aubrey throws it off with dumb interruptions.

Aubrey takes the team over to the studio to begin production. Aubrey wants to get a picture of Eric in front of the NY skyline. Aubrey stops the van, in Arsenio’s words Aubrey said, “let me put my Va*ina on the back of your neck”. Aubrey climbs up on top of Arsenio and takes her picture of the skyline. Aubrey has Eric on the phone, she asks him if they can have a photo of him because she wants to do a younger version of Trump, he says ok. Aubrey gives the direction for the display, then tasks Theresa and Arsenio to go together to get materials. Arsenio thinks it is ridiculous that she is sending the two of them together when it only requires on of them. Theresa calls Aubrey from the store and Aubrey treats her like a child on the phone. Eric comes in and is very surprised to be cast as a model for her task, he wonders if she is just trying to score browning points. Aubrey throws Arsenio and Theresa right under the bus, she takes credit for anything and tells Eric that neither can come up with a strong concept. Eric knows that if she wins she will take full credit, if she loses she will blame Arsenio and Theresa. Aubrey is doing all the work and still pushing Arsenio and Theresa to the side, even though they are back in the studio. Theresa take the initiative and helps with painting.

Clay has to execute the design for the display, but he is having a hard time and taking too much time trying to make up his mind rather than get the task started and completed. Dayana comes up with an idea to print a flyer and Clay says no, Dayana disagrees she thinks it is important for people to take something home with them. Lisa, Penn and Clay are busy painting but Lisa takes a break to go snoop on the other team, she finds they have the same idea. Lisa shares her snooping with the rest of the team and Clay is worried that the other team’s concept will be more creative.

The teams arrive at Macy’s, they need to put up their displays and do the finishing touches. Aubrey is delighted with her concept, she calls herself a “mini Trump”. Arsenio thinks the Latin translation for Aubrey is “bossy”. George arrives to see how things are doing, Aubrey tries to push how much of a good job she has done and George thinks the silhouette of Eric is wrong, it looks nothing like Trump.

Clay and his team love their display and Clay thinks they will win, meanwhile Dayana is the one that is noticing the tiny details, maybe because her face is over the only one on the display.

Aubrey is very nervous about this task and she wants to win for her charity.  The executives come in- Aubrey starts her presentation.

Lisa does not know what to think – she thinks they must have won because they used a picture of Dayana.

The execs thought Aubrey did an excellent job and loved their slogan.  She thought they were lacking creativity in the display itself.

The execs loved the beautiful picture of Dayana in the ad.  Though they did not like the slogan.

They liked elements of both displays.

Donald tells the two teams that they both had elements that were good. He wishes it was easier.

Aubrey tells Donald his team was incredible.  Aubrey claims that everyone did the work this week.  Arsenio says that Teresa is a competitor.

Arsenio thinks that Clay did a great job with the presentation and Dayana is beautiful.  Aubrey pipes up they used a sexy model too they used Eric Trump as a young Donald.  What a suck up!

Eric asks Aubrey to speak about her team because when she spoke to him she felt like  she was the one person team.  Aubrey claimed she came up with all the ideas.  Teresa agrees that when Aubrey comes up with an idea that hard to argue with her.

Arsenio says he thinks everyone wants to feel appreciated. He says he found a quote from Donald in his own words that they used.  Aubrey disagrees and says she came up with the quote.  Yikes, I can see another fight brewing!

Arsenio says he found it on the internet.  Aubrey says she had it written down way before Arsenio gave the slogan.

Aubrey said using women on the display is boring.  Clay says no picture of Dayana is boring.

Donald tells the team members that he said he would give $100,000 to the winning team if he loved the presentation.  The problem is he did not love on of the presentations – he loved some of both.

Aubrey is really happy that she won – her team decides to toast Donald Trump.  Aubrey is not pleased because she was not the hands down winner.  She wanted the $100,000.  She feels if she had better players she would have won.

Donald tells Clay they loved Dayana’s picture but they did not like how big the picture was.  Donald asks whose idea it was to have Dayana’s picture so big.  Everyone, says it was a concenus and Donald is not happy about it.

Clay is going to bring Penn back and Dayana back.  Lisa is going to escape – she is safe.

When Lisa gets back to the room Aubrey asks her why she told Donald that Dayana did a good job.  Lisa tells her  because she did.  Dayana says a good job is not a great jon.  She tells Lisa because of her endorsement Donald may save Dayana and let Penn go.

Clay, Penn and Dayana head back to the boardroom.  Donald asks why Clay brought Dayana back.  He tells Donald he did not bring back because of this task – but because he is thinking long term who will be better to go on.

Donald tells Dayana this has been the 6th time she is in the boardroom.  Dayana claims when she worked with the women she did not have a chance -the women just wanted her to go shopping.

Donald asks Clay who should be fired and Clay says PENN.

Penn admits he came up with the slogan but he does say he also had ideas the execs liked.

Penn says he would fire Clay.

Donald asks Dayana who would she fire – Dayana says she would fire Clay.

Donald fires PENN because he came up with the slogan!!!