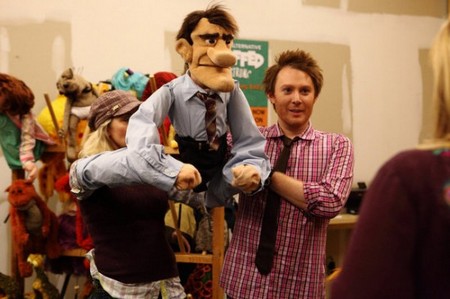 The Celebrity Apprentice returns tonight to NBC with a whole new episode called ‘Puppet Up.’  Stand by as we live blog the episode with all the up-to-the-minute details.

This season of show has certainly had a lot of drama and it does not look like it is going to stop any time soon!  On last week’s episode still reeling from last week’s dramatic Boardroom, Lisa went on an emotional tirade Arsenio. With the whereabouts of an Aubrey still unknown, a verbal firestorm ignited.  In the boardroom Lisa really got our of line and I was shocked and disappointed that Donald did not shut her down.

Lisa attacked Lou Ferrigno after he finally spoke up  in the boardroom and called Lisa out for her vicious tongue.  Lisa made me feel very uncomfortable when she insulted Lou by disparaging his hearing loss disability which he has lived with since a very young age.  Did you think Lisa was out of line? If you missed the episode you can read our full and detailed recap here.

On tonight’s episode the celebrity players design two original puppets and perform an improvisational show with a Henson Alternative troupe. Dramas surround an outspoken contestant and a player who spirals downward after being marginalized in the task.  Rumor has it that Lisa Lampanelli and Paul Teutel, Sr. will be the project managers for this task.  Expect to see a cat fight because we have heard that Lisa and Dayana have an explosive fight.

I am crossing my fingers that tonight is the night we see Lisa sent home!  What do you think of Lisa on this season of Celebrity Apprentice?  Do you dislike her as much as I do?

We will be live blogging the episode with all the up-to-the-minute details at 8PM EST so make sure to come back to this spot and watch the show with us.   Make sure to refresh often so you get the most current info!  While you wait for the episode you can catch a sneak peek of tonight’s what looks like another explosive episode HERE!

Teresa is lucky because she gets to give $60,000 to her charity, Nefcare.  She is just so so happy… but business is business and the show must go on!

Since the teams are imbalanced after Lou’s departure Forte has to pick a member of Unanimous and Clay is the one selected – he switches teams and joins Dayana, Lisa and Penn – quite a powerhouse team!

They all meet at FAO Schwarz with Brian Henson to work on creating adult puppets. Lisa is the PM for Forte while Paul is the PM for Unanimous and naturally he is clued out – and he has no idea what he is doing on this $20,000 charity task.

This task revolves about improvisation which Lisa is really good at as is Clay – of course Penn is a genius and masters everything he touches – he is so much more intelligent than the rest of the contestants it is not even close. Dayana needs to do something and show some talent – other than strutting her stuff.

Unanimous is drifting – they are thinking about making puppets based upon their actual team, – luckily they have Arsenio who is very talented and has improve experience. Aubrey is obnoxious as always and need to learn fast how step back and be a team player.

Brian Henson the son of Muppet’s creator Jim Henson comes to visit Unanimous –giving them a chance to learn all about what is acceptable – what the rules are for the performance – they learn that improv is supposed to be the focus of the task.

Penn has to host because he is just too tall to be a puppeteer – too bad, so sad since he is the most talented person on the show. Lisa is told by Clay to put on a Spanish accent – this offends Dayana – what a moron she is as this supposed to be comedy – besides she already has a thick accent – what a Prima Donna. She will no way win this show.

Unanimous is working with Mohawks and puppets in Arsenio’s style. Meanwhile, Lisa encourages Dayana to get involved by cutting and pasting wardrobes. They bicker nonstop and it is high comedy – those two should do a show together.

Teresa cannot come up with a name for her puppet and the rest of her team are shocked at her stupidity.

Paul is so lost it is pathetic. Aubrey is really upset over Paul’s inept leadership.

Teresa is useless as a puppeteer as she has no idea what she is doing. Penn is working his hardest as always but Dayana is really doing well in the puppet making department. Penn is wondering what Lisa’s problem with Dayana in the boardroom really is since he sees Day really pushing hard.

Eric is assigned to Forte while Ivanka is assigned to Unanimous. Eric notices that Dayana is having trouble focusing on her assignments and he is concerned that there is too much tension between her and Lisa.

Paul still is still just a useless observer and has no idea what he is doing – it is really starting to piss off his team… especially since he is the PM. Aubrey is correct in thinking that Teresa sucks – and she is trying to play the hero – the glory hog!

There is a lot of drama with Lisa and Dayana. Lisa screams, rants and curses a lot. Lisa tells Dayana to do whatever she wants. Clay tried to calmly the situation down.

Clay is upset because they have to go out there and do a comedy performance. Lisa tells Dayana that she is a pain in the ass. Lisa also says that they had to create a job for Dayana again.

Lisa tells Dayana to do whatever she wants and screams and swears a lot. Dayana gets upset because she feels that she treats Lisa a lot better than she treats other people. She feels Lisa has no decency or respect for anyone. Dayana is disappointed in her. She has been dealing with this she says since she started playing this game.

Lisa’s ranting at Penn and Clay and asked the men why they cannot step then and deal with Dayana. Clay feels Lisa is threatened by how beautiful Dayana is.

Lisa tells Penn it would be nice if someone would step in and help her. Penn offers to come out and speak with Dayana. He goes out to talk to her and tells her they should all pull together and do good job. Penn decided it would be better just to listen to what Dayana had to say because she was so upset. Penn asks if she wants to go back in the room or does she want to stay separate. Clay was concerned how it would go but he feels that by the time they got to the show they got everything together.

Penn introduces Clay and the Queen of Mean Lisa. Penn is doing an awesome job as a host. Clay is happy that Lisa and him could play so well off each other.
Lisa does not care if anyone thought it was too risqué.

Paul is happy he is not stressed but he can feel the energy of his team. Aubrey is the host.

The judges were very impressed with how much the teams had accomplished in one day. The judges felt thatAubrey did a great job setting things up. They felt Arsenio was really solid. They they felt Teresa was breaking all the rules.

They thought Lisa was solid but they felt the team attached sexual things too much. The execs felt most of Penn’s blacking the scenes was good but Penn made a few mistakes.

Donald as Dayana how she got along with Lisa. Dayana tells Donald that Lisa was an okay project manager not great. Lisa tells Donald she did not think much of Dayana. Lisa thinks that Dayana does not want to be behind the scenes she always wants to be in front of the camera.

Dayana denies that she wants to be in front of the camera. Dayana tells Donald Clay and Lisa were the puppeteers. Clay tells Donald he enjoyed being a puppeteer. Clay thinks Lisa and he had a great rapport onstage. Ivanka comments that Lisa made a good decision by who she chose as the puppeteers.

Dayana is upset because she says there is a level of aggression and disrespected Lisa projects to others. If Lisa loses she’s going to bring back no one. She tells Donald she may bring just herself back. She decides she is not going to be a villain because she has strong opinions and she has not decided what she is going to do yet. Lisa cries but I’m not buying it.

Paul tells Donald he did not know anything about puppets. It was the situation when no one wanted to take the position so he took it. Paul thinks they want him gone. He thinks his team members to did well. If Paul loses his weak player was Teresa. Sometimes it takes Teresa a long time to make up her mind.

Arsenio thought Paul was a trooper and the inspiration was that he did not quit even though he had a bad back.

Lisa and her team congratulate each other. Lisa says she can finally show her face around the gay community now that she’s one for her charity. Her team sits to watch Paul’s team.

Donald asks him if Arsenio sees what the execs were saying. Arsenio feels like perhaps he boxed himself in because his puppet was a rocker.

Paul says Arsenio had his baby and Teresa had hers so he kind of feels like those two make the decisions about the puppet. He feels like the thing was with Teresa’s puppet she did not stop – she kept adding to the puppet. Teresa feels like Paul should be fired.

Aubrey says Paul was injured and it really wasn’t his field.  Teresa says that Paul even said I’d rather be riding my motorcycle them being here. Teresa says if Paul throws her under the bus she will throw him under the bus.

Paul decides to let Arsenio escape and leave the board room. Donald sends Paul, Teresa and Aubrey out of the room – someone will be fired when they come back.

Aubrey tells Donald she would fire Paul because Teresa tried really hard even though it was out of her comfort zone. Aubrey feels as far as using people’s strong points it is a Project Manager’s job. Paul thinks that Aubrey is incredible.

Paul tells Donald he would not fire Aubrey. Paul agrees that he signed off on the work that was done. Donald feels Paul should have brought Arsenio back and not Aubrey.