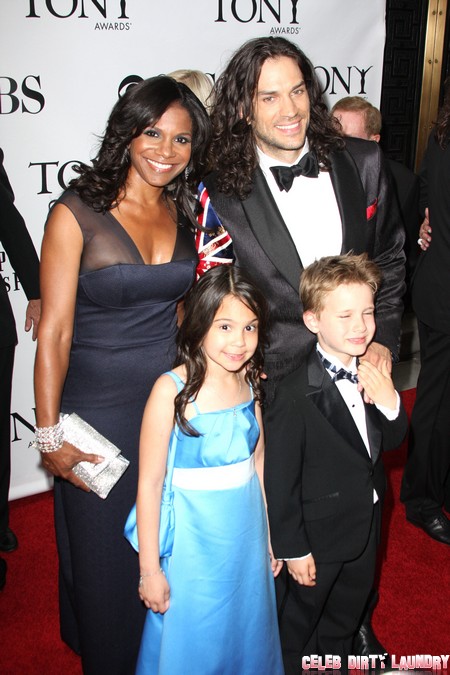 Audra McDonald – best known for her turn as Addison’s bestie Dr. Naomi Bennett on Private Practice – tied the knot with Broadway phenom Will Swenson at their New York home on Saturday evening. Swenson and the Private Practice star met on Broadway five years ago and got engaged last year in Puerto Rico.

Most recently, McDonald put her Julliard training to work in the lead role of Bess in a Broadway revival of Porgy and Bess. Audra snagged her fifth Tony for the Gershwin show – putting her in a three way tie for most awards by a woman with legends Angela Lansbury and Julie Harris.

Audra’s man Will just closed a turn as the drag queen lead in Priscilla Queen of the Desert on the Great White Way. When it came to their wedding though, Audra got the dress and what a dress it was! She turned to her Porgy and Bess costumer and Project Runway runner up Emilio Sosa for her big day. The designer crafted McDonald a one-of-a-kind gown from his ESosa design house for her center stage premiere as blushing bride.

Audra and love Will – both considered Broadway royalty – have three children between them and this is the second wedding for both. McDonald is mom to 11 year old Zoe Madeline and Swenson has sons Bridger and Sawyer (11 and 8.) The newlyweds told People they look forward to matrimonial bliss and hanging out with their “posse of three.”

Audra doesn’t just feel strongly about her own marriage – she’s been an advocate for legalizing gay marriage for years. So much so that she sang gratis at the first legal gay marriage in New York with Mayor Bloomberg officiating. Audra tweeted after the ceremony Saturday evening, “Well that was just the best day ever.” Hats off to the happy couple – may they be in harmony for years to come!