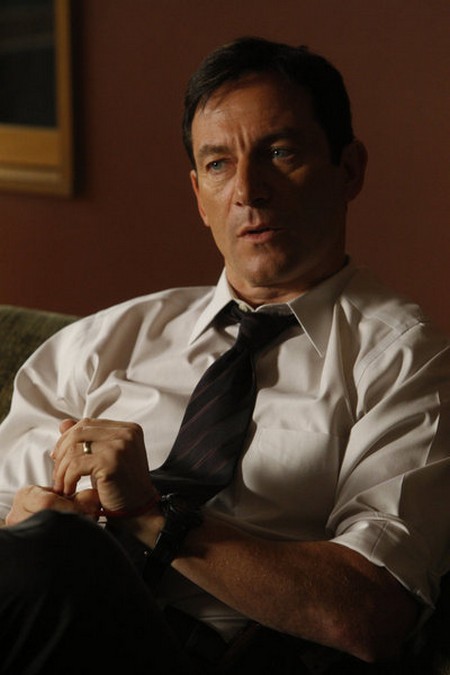 Tonight a whole new episode of NBC’s new drama Awake airs.  It is the second episode of the first season and it is called ‘The Two Men.’  Stand by as we live blog the show with all the up-to-the-minute results.  Did you watch the premiere last week?  We did and we recapped it here for you!  The show is as an intriguing drama about a detective who finds he is leading an arduous double life that defies reality.   I found it a little hard to follow but by the end of it I got my groove and loved it.

On tonight’s show Detective Michael Britten continues to deal with his parallel versions of reality.  In one world he’s looking for ways to reconnect with his son, Rex, by offering him some normalcy while they deal with his mother’s death. In the other, Britten works to understand the emotions that his grieving wife, Hannah is going through.

Meanwhile, a witness in the murder of a homeless man tells Britten and his rookie partner, Vega that a “small guy” was spotted at the scene of the crime. When that clue crosses over into the case Britten is working on in his other reality, Bird, is confused by his partner’s sudden interest in the height of the suspects they are investigating. Meanwhile, Britten’s captain shows growing concern over his behavior. Later, the events surrounding the fateful accident that changed Britten’s life come into question and throughout, Dr. Lee   and Dr. Evans continue to present their dueling theories on Britton’s condition.

Awake airs at 10PM and we will be live blogging it with all the up-to-the-minute details. So make sure to come back to this spot and spend the evening with us!  While you wait for the recap, check out a sneak peek video of tonight’s show below! Make sure to keep refreshing to get the most current info!!

RECAP: Michael is in Rex’s world, he’s with Detective Freeman, they are on a new case of Dr. Bernard Mckenzie who was murdered. At dinner, Michael is with his son to have dinner and he tells him that they don’t have to sit down and have dinner together every night.

Michael is back in Hannah’s world, Rex got mail and Michael wants to open it but Hannah doesn’t want to and she can’t understand how easy it is for Michael with Rex gone when it’s not that easy for her. At Dr. Lee’s, Michael explains that he and Hannah have different reactions to Rex’s death, she acts like he was never even born sometimes. At work, Michael sees a name on the board, it’s Bernard Mackenzie and Detective Vega tells him that it’s a dead homeless guy, Michael tells him to get the file.

Both Dr. Evans and Dr. Lee think they have figured out what is going on in Michael’s mind, but he is convinced they don’t know and he is fine with being awake all the time.

Hannah heads over to Cole’s house, he was Rex’s friend, she wants to know what is in the box that Rex ordered and why he was having it delivered to his house. Cole brings her to his garage, he and Michael were working on building a mortorcycle. He goes on to tell her that Rex was really the one who knew how to bit and she tells him to finish it because Rex would have wanted him to. Michael is on the case with Vega who is surprised that Michael wants to look into the case of Bernard Mackenzie, some homeless guy. Michael is all around town asking questions with Vega behind his back. Michael finds a black man on the street and starts to ask him questions, he tells him that he seen a guy get shot and it was a small guy that did it.

Back in Rex’s world, Michael is with Freeman on the case, they are questioning Dr. Taylor, asking him if he killed Dr. McKenzie, apparently he was screwed by the victim. Michael questions him and asks how tall he is, just then his lawyer walks in. Michael asks Dr. Taylor what he was watching on tv the night of the killing and he tells him that he was watching a game on tv and the Steelers had scored, he also remembers something about what the commentary, something about the defence. Both Michael and Freeman watch a tape of the game. Dr. Taylor was right about the game, Michael believes he is not guilty. Meanwhile, Freeman is suspicious of Michael and his intuition. Michael and Freeman visit a kid named Sam that deleted a lot of medical records, he wanted to get his dad’s medical file because he died and had no information on him. He was the one who hacked Dr. Mckenzie’s records. Michael asks him where he was on Sunday night and he says he was at a movie, he has a ticket as proof. Before they leave, Michael asks how tall he is. Outside, Freeman wants to know why Michael keeps asking everyone how tall they are and Michael tells him it’s just a theory. Later at home, Michael has made dinner and Rex doesn’t want to stay, he wants to go hang out with Cole. Michael is upset but He tells Rex to go and be back by 11. Meanwhile, Rex and Cole go to work on the motor cycle. Emma walks in and she’s going to Coachella, that’s where Rex and Cole want to go with the motorcycle.

In Hannah’s world, it’s morning and she tells Michael that she went through the mail, it was parts for a motorcycle that Rex and Cole were working on. Hannah thanks Michael, he was right about opening the box, something felt weirdly alive by opening it. At work, Vega tells Michael that they have a new case just when the black man from the street walks in and asks for a sandwhich. Michael and Vega argue, Vega wants him to take the new case and stop concentrating on a dead case. Captain Harper calls Michael into her office and tells him either to take the new case or retire.

Michael heads back to the morgue to only find out that Dr. Mackenzie was substituting his own sperm to patients, he’s got a lot of kids out there.

Michael and Freeman bring Sam in, he’s the kid that hacked Dr. Mackenzie’s computer. They ask him when he found out what the doctor was doing and he tells them in school, he found out that his blood type was incompatible with his parents. He hacked into the doctors records to find out what happened, he found 15 other children in the past three years that have the same genetic makeup as him. Sam tells them that he didn’t go to the police because all the doctor would have got was a fine and instead of being a part of his family, he is a child of a monster and he got rid of him so nobody else got hurt. Sam begs them to do what they want with him but please don’t let the rest of the kids find out.

Dr. Lee is concerned that Michael is relying on his dreams as anything other than dreams. Meanwhile, Dr. Evans thinks it’s remarkable that he solved the case from going between both worlds. Michael still feels like he’s missing something though.

Michael heads out with Vega, but Harper is suspicious and goes to check what he was doing on his computer.

Michael is at home, Rex tells him he is going to the beach and Michael tells him to wear a helmet. Rex turns around and asks his dad if he wants to see it.

Michael is back in Hannah’s world, Cole is actually sitting on the motor cycle and the two of them are looking at it, Hannah takes it for a spin in her world and Rex takes it for one in his.

That’s it for tonight’s episode, I have a feeling Michael will soon be forced to confront the truth about what really happened the night of the crash that killed his family and sent him spiralling into two different worlds.