Baby For Blake Lively? So It Was A Shotgun Wedding After All 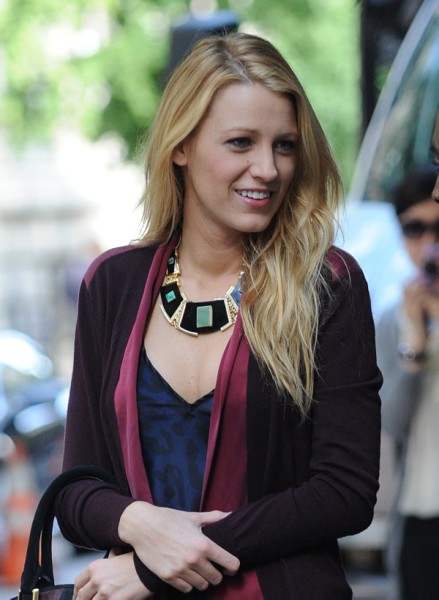 So the tabloids have been trying to make the Blake Lively pregnant story for awhile now. There’s just no reason a 25-year-old would marry the guy she’s living with unless she was knocked up! But Page Six is involved now and is adding some fuel to the fire that Blake and Ryan’s wedding was actually top secret and rushed because Blake is expecting her first baby.

“Blake is usually really careful about what she eats, but since her wedding, she seems to be eating a lot more. Everyone on set is on bump-watch,” a source told the magazine.

OK, I actually do think Blake’s pregnant but not because of this lame ass quote. Blake eats like sh-t. She’s always been that way and she gladly tells everyone about her love for baking and cupcakes. She’s also said she doesn’t like to work out so if her tum tum gets a little flappy from time to time it’s because she’s actually enjoying herself. I want to hate Blake so much but I just can’t! The Page Six source also said people on the Gossip Girl set noticed she’s “glowing“. Well, sh-t. She just got married to a dude she’s had her eyes on for years. Let the biotch be happy with her accomplishment before you stick her fabulous ass in mom jeans.

Now, what is interesting is that when Blake’s Gossip Girl family surprised her with a mini-celebration on her return to set after the wedding, they toasted her with faux-champagne. Everyone drank ginger ale. I would have been the assh-ole looking around with an “Are you serioius?” look on my face. I don’t care how early in the morning it is, you toast with champagne damn it! And it’s not like Blake’s a child bride. She’s 25. Where was the alcohol!? So this is kind of turning into a Kate Middleton toasting with water situation only I think Blake actually really wants to be a mom and isn’t just fulfilling a duty. What? You mean Prince William isn’t ready to be a father? Trust.