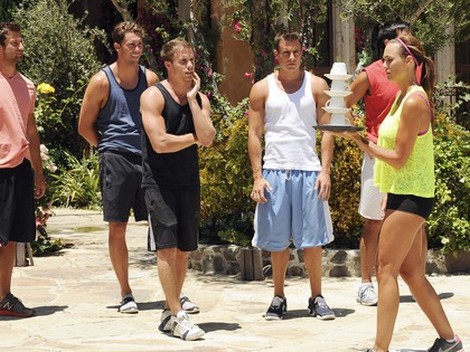 Bachelor Pad is back tonight on ABC with a whole new episode. On tonight’s show The contestants compete in a spelling bee; one-on-one dates include a barn hoedown and a day exploring the Channel Islands; an escalating house rivalry leads to a surprising elimination. If you missed last week’s episode, you can read our full and detailed recap here for you.

On last week’s show the contestants had to stack teacups in a challenge titled “Great Fall of China.” One-on-one dates included an overnight remote camping trip and a Pretty Woman inspired tour of Los Angeles.

Chris H. announced that he is going to shake up the house tonight, everyone will vote out the woman who they think should go home and the twist, the voted out women will take whichever man she chooses to leave the show with her.  Erica was sent  home, and she got to take one bachelor with her, she choose Michael and Rachel was heartbroken.  Rachel claimed, “I Was Falling in Love!”

On tonight’s show The contestants compete in a spelling bee; one-on-one dates include a barn hoedown and a day exploring the Channel Islands; an escalating house rivalry leads to a surprising elimination. Chris also announces a new shocking twist: Previously competing as individuals, the contestants must team up to compete as a duo and be voted off two-by-two.

Tonight’s episode is going to be an exciting one, so be sure to tune in for our live coverage ABC’s Bachelor Pad 3 at 8PM EST! While you wait for our recap hit the comments and let us know what you thought of last week’s episode 5 of Bachelor Pad 2012?

Tonight’s episode:  Rachel is still crying because Erica sent home Michael, on the bright side, there are only ten of them left on the show. The competition is going to take a dramatic turn, up to his point they have played as individuals, now they will be playing as couples and voted off as couples.

The only people without partners are Nick and Rachel, so they are now a couple. Sarah and Chris are getting the last word, they can’t believe that they are still in the house when everyone wants them gone.

Everyone is against Chris and Sarah, they better win the next challenge or they will do doubt be going home.

The couples all head on a school bus to the next competition at a performing arts center for a Spelling Bee. The couples are playing together, they are spelling words by alternating letters, three strikes and they are out of the competition.

The judges for the competition look like a bunch of “Harry Potter” type kids who are the best spellers in the state of California. At the end of nine rounds, the last two couples are Chris and Sarah, Ed and Jaclyn. There are three strikes for each couple, it’s now sudden death. Chris and Sarah have won the Spelling Bee, the roses are theirs and everyone else is pissed, Blakely is in tears and looks like she has trouble breathing. Ed and Jaclyn get a romantic overnight date because they came in second place.

Everyone else discouraged, they are all friends and two of them are going home. Chris and Sarah head right out on their date via limo to a private plane, then they head on an old train and stop at a lovely water front are for a picnic and a swim. Chris feels like he is holding back a little bit, he feels like he is still trying to get over his broken heart from his breakup with Emily on The Bachelorette.

Meanwhile, Rachel is an absolute disaster losing her focus since Michael has left, she no longer thinks it is worth the money to stay in the game.

Chris and Sarah have a candid talk and although he is not over Emily, he is still enjoying himself wth Sarah and just wants to take it slow.

Rachel wants to take herself out of the game, but Jaclyn and Blakely don’t want her to leave; they start conspiring against Kalon and Lindzi.

Chris and Sarah end their evening rugged and sexy in a romantic secluded barn.

Ed and Jaclyn are heading out on their date, it’s her first overnight date ever. They leave in a limo and toast the day with champagne. They head on a private plane and all Jaclyn can think about is how she doesn’t want to get hurt again.

The picnic on a hill beside the water and they start talking – Ed tells Jaclyn that he has been pursuing someone at home for a long time and it started turning into a relationship even though they broke it off before he came on the show so he would be single. Ed goes on to confess that he has feelings for the girl at home, Jaclyn tells him that if she knew she probably would not have done what she did with him.

Jaclyn is completely shocked, she feels like she is always the girl that gets screwed over even though she has been very chill about everything, she trusted Ed and feels both embarrassed and betrayed.

Tony plans a surprise date with Blakeley, the toast with wine and talk about their connection. Blakely confesses to Tony that she has huge trust issues and it’s going to take someone really strong to get through that.

Jaclyn’s date with Ed was really uncomfortable and finds it really awkward to be with him now that she knows he is in to someone else. They are now at dinner and Jaclyn brings up the fact that she slept with him and she would not have if she had known he had no intention of giving them a chance at a relationship. They continue to talk and Ed tells her that they sleep in the same bed so he considers them a couple, Jaclyn falls for it and heads upstairs to bed with Ed.

The next morning, Ed and Jaclyn are back with two roses, they can’t give them to themselves but they get to save one couple with the two roses.

Everybody wants a rose, there is going to be some huge butt kissing right up until they are given out. It’s time to hand out the roses, they are given to Blakely and Tony.

It’s time for the Rose Ceremony, it’s not easy decision tonight, but I have a feeling Kalon and Lindzi are going to head home unless someone does something really dumb before the votes are cast.

Nick put his foot in his mouth with Tony just before the votes are cast, is there hope for Kalon and Lindzi to stay in the game?

Tony catches Rachel on the phone with Michael and he can’t believe what a stupid move that is, if she gets sent home, he will also be leaving, he is livid.

It’s to find out who is going home, unfortunately it is Kalon and Lindzi who are eliminated.