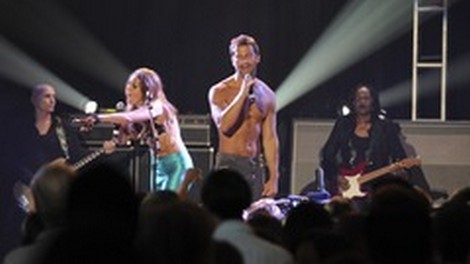 Bachelor Pad is back tonight on ABC with a whole new episode. On tonight’s show the contestants compete in a trivia challenge and a karaoke competition; a contestant must choose between strategy and loyalty. If you missed last week’s episode, you can read our full and detailed recap here for you.

On last week’s show the contestants compete in a spelling bee; one-on-one dates include a barn hoedown and a day exploring the Channel Islands; an escalating house rivalry leads to a surprising elimination. At the Rose Ceremony, it was not an easy decision, but I had a feeling Kalon and Lindzi were going to head home unless somebody did something really dumb before the votes were cast.  Kalon and Lindzi were eliminated!

On tonight’s show a conflicted contestant has to choose between strategy and loyalty that could betray a best friend. There are two challenges: a sudden death dangling competition in which contestants have to depend on their partners being able to figure out some “Bachelor Pad Trivia” which will avoid them from being plummeted into the pool; the second is a karaoke competition which will be played out in front of 500 people at a Hollywood concert venue with a surprise guest, Night Ranger.

Tonight’s roses are very important as the couple with the roses will decide who to take to the finals with them.

Tonight’s episode is going to be an exciting one, so be sure to tune in for our live coverage ABC’s Bachelor Pad 3 at 8PM EST! While you wait for our recap hit the comments and let us know what you thought of last week’s episode 6 of Bachelor Pad 2012?

Tonight’s episode: It is down to the nitty gritty, things are about to get ugly, I can’t wait! There are only four couples, Nick and Rachel have a huge disadvantage because they have not been partners for a long time. After the Rose Ceremony, Rachel tells everyone that it is tough to still be in the game and wouldn’t have minded if she had been sent home (dumb!).

It’s time for the competition, but there is a change, the winner of this competition will have a lot of power in their hands. Chris H. tells everyone to pack their bags, because one couple will be heading home after the competition.

Tony is confident he is going to win this, he is doing it for his son. Sarah and Chris are the dark horses, but Chris is confident going into the challenge.

This competition is part brain and part brawn, one person has to answer Bachelor Pad trivia questions and as long as they are answered correctly, the partners are ok. If they answer incorrectly the partner who is suspended above the pool will have their line cut and wrong questions will get them falling into the pool and out of the game.

Chris H. offers to let the couples say something to Chris and Sarah before they decide who to send home. Tony, Nick and Blakeley all make a plea, in the end, it is Tony and Blakeley that are heading home. This is obviously a strategic move on Chris and Sarah’s part, Tony would have got the votes if they were the final two because of his repeatedly saying that he was playing this game to win so he could take better care of his son.

There are only three couples left and the next competition starts right now, the winner will secure themselves a spot in the finals. The couples are surprised to be brought in front of Night Ranger who are singing “Sister Christian”. Chris H. tells the contestants that they will all be singing that song with a live band, in front of a live audience and the judges will be Night Ranger.

Vocal, stage presence and chemistry is what the band will be looking for.  Chris H. has no faith in the couples, he tells the band they are going to be terrible. Learning a new song in 24 hours and having to sing it in front of hundreds of people is not going to be easy.

The couples are all with their vocal coaches and things are not going so well. Ed and Jaclyn are having the hardest time and feel like they have accomplished nothing.

It’s time to perform, the couples are getting dressed up back stage at the Paladium in front of hundred’s fans.  The place is going wild, everyone is this close to winning $250,000.00. Chris H. introduces the couples, Chris & Sarah, Nick & Rachel and Ed & Jaclyn. The judges are the founding members of Night Ranger; Jack Blades, Kelly Keagy and Brad Gillis. Backstage they randomly drew who would be going first, it is Rachel and Nick. They are doing an awesome job, Nick came out of the wood works and killed it. Rachel’s raspy voice was great and she nailed the lyrics, they get a standing ovation from the judges.

Jaclyn and Ed are next. Jaclyn forgets the lyrics and they both ask to start over. The band doesn’t hear them and just continue. Jaclyn tries some silly sexy dance that actually looked awkward and cheesy. The story is about a brother giving a sister advice and Jaclyn and Ed are dry humping on stage, yikes! The judges looked embarrassed and a little angry that their song wasn’t taken seriously.

Chris and Sarah are next and they are not going down without a fight. They are trying very hard, but sadly they are really terrible, Sarah’s dancing is weird and makes you want to call a medic. The judges notice that Chris has the words to the song written on his arm.

Time for the verdict, Rachel and Nick get good comments. Jaclyn and Ed get a “worst performance”. Sarah and Chris get a nod for being the most fun and entertaining.  Rachel and Nick win the competition, they both get a rose. Nick is thrilled because he has never won a competition, until now. Nick and Rachel must decide which couple they want to take to the finals with them.

Rachel and Nick are not on the same page when deciding which couple to take to the finals with.  Rachel is worried that she is going to lose a friend in Jaclyn if she doesn’t choose her, Nick tells her to think about the money because in the end, it’s a game.

It is time for the Rose Ceremony, this one is going to be a heart breaker. Jaclyn is confident that she is going through to finals because she is friends with Rachel. Really, this is a game, isn’t it?

The couple moving forward to the finals with Rachel & Nick are Sarah & Chris.

Ed is shocked, Jaclyn is fighting back the tears, Rachel has her hand covering her face. Jaclyn is now sobbing like a complete idiot, did someone die? Sarah and Chris take their rose and respectably walk to the side so Rachel and Nick can say goodbye to Jaclyn and Ed. Jaclyn gives Rachel one of those “I could strangle you” hugs, she clearly takes it as a stab in the back.

In the limo, Jaclyn goes on to say that she trusted Rachel’s friendship and both she and Ed are blown away by what Rachel did. Rachel is upset over what she did and calls money “ugly” and not worth what she did to Jaclyn, meanwhile Jaclyn is still in the limo and says that Rachel is dead to her.