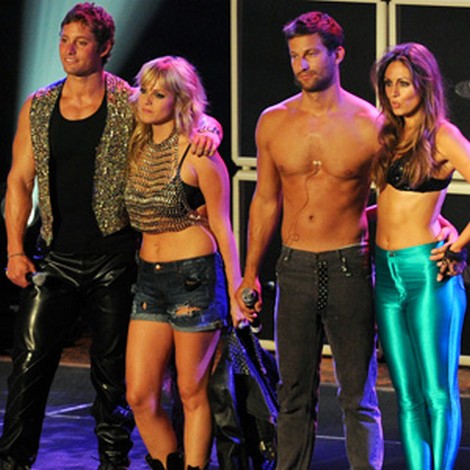 Bachelor Pad is back tonight on ABC with a whole new episode and it is the finale of season 3. On tonight’s show the last surviving two couples compete for the big final prize.  Rachel Trueheart, a 27-year-old executive assistant from New York, and Nick Peterson, a 17-year-old trainer from Tampa, compete against Sarah Newlon, a 28-year-old manager from St. Louis, and Chris Bukowski, a twenty-five-year-old corporate sales director from Chicago. If you missed last week’s episode, you can read our full and detailed recap here for you.

On last week’s show the final competition had the couples getting dressed up in 1980’s spandex and big hair to perform “Sister Christian” in front of 600 Night Ranger fans, live at the Paladium. The judges for the competition were the founding members of Night Ranger; Jack Blades, Kelly Keagy and Brad Gillis. The judges were looking for vocal ability, stage presence and chemistry.  When it was time for the judges to announce who won, they told Jaclyn and Ed that they got the “worst performance”, Nick and Rachel won.  In the end, Ed and Jaclyn were sent home tonight and no doubt will go down in Bachelor Pad history as the most embarrassing and disrespectful players in the show’s history.

On tonight’s show and one that host Chis Harrison described as “one of the wildest, craziest, most dramatic and devastatingly stunning shows you have ever seen” the remaining contestants compete for the $250,000.  We have already spoiled the episode for you here if you must know what happens tonight.  I can assure you there is going to be a lot of drama happening tonight!

Tonight’s episode is going to be an exciting one filled with tons of drama, so be sure to tune in for our live coverage ABC’s Bachelor Pad 3 at 8PM EST! While you wait for our recap hit the comments and let us know what you thought of last week’s episode 7 of Bachelor Pad 2012?

Tonight’s episode: On tonight’s most shocking and disturbing Bachelor Pad ever, the drama is going to explode! Tonight someone is going to win $250,000.00 and it’s going to be insane.

Host, Chris Harrison is back with all the contestants, minus the final two couples for a candid discussion. But first, he takes a look back at all the drama; the hooking up, the couples that are still together, the players that manipulated and lied, the tears and who is the best snake.

Chris H. asks Erica R. if the game is all about lying, she says yes. Chris H. then says that one of the best things that came out of this season was Kalon and Lindzi, they are still going strong. Erica R. jumps in and tells Lindzi to be careful with Kalon because he is always around other girls and was with his ex last weekend.

Michael got sent home from Bachelor Pad 3 in one of the most dramatic exits ever and he didn’t even expect to make it far in the show because he already won the game last season. Michael hooked up with Rachel on season 3 after getting his heart broken in the previous season. Chris H. looks back at all the devilish things Michael did to stay on the show and how Erica R. personally took him off the show. Erica R. tells Chris H. that Michael was supposed to have her back on the show because they knew each other and at sometime she lost him as a friend but she wasn’t notified. Michael goes on to say how he didn’t go on the show to find a wife and Jaclyn rakes him over the coals about it because she claims he broke Rachel’s heart.

Jaclyn came on to the show to win the money, she ended up getting betrayed by her best friend Rachel and fell into a relationship with Ed. Jaclyn trusted Rachel with her life and in the end, she and Nick choose Chris and Sarah to take to the finals and sent Jaclyn and Ed home. Jaclyn swears that she played the most loyal game and best friend doing that to you, is unforgivable to her. Jaclyn says that her relationship is no longer the same, she won’t forgive and forget.

Blakely joins Chris H. in the hot seat, she came on the show to win it but everything kind of fell apart when Chris traded her in for Sarah and Jamie. But, Blakeley then fell into Tony and got more than she bargained for when they both fell for each other. The couple was sent home by none other than Chris himself. Jamie adds that she had never had intentions of being Chris’s partner and she doesn’t know why Blakeley doesn’t like her. Jamie and Jaclyn start getting into it, Jaclyn calls her socially awkward and tells her that she doesn’t know how to communicate with girls. Back to Blakeley, Chris H. wants to know what it is about Tony that connects with her. Blakeley gets emotional and tells Chris H. that she doesn’t know what she did to be lucky enough to have Tony in her life, she trusts them. Blakeley admits to Chris H. that she is in love with Tony and she didn’t expect it.

Blakeley and Tony have an announcement to make, they are both madly in love with each other and are taking to the next step, Blakeley is moving in with Tony. There is one last thing, Tony tells Blakeley that he is madly in love with her and can’t imagine her not in his life and wants to spend the rest of his life with her. Tony gets down on one knee and asks Blakeley to marry him and he even has the ring, Blakeley says yes. Of course the ring is from Neil Lane jewellers and The Bachelor Pad most likely picked up the tab.

Chris H. then turns the attention over to Chris who tells him that his family was really disappointed in how he played the game, especially how he hurt Jamie and Blakeley – there was no excuse for what he did and he took the wrong approach. Jamie takes a stab at Chris and tells him that she thinks he would have been a terrible father to Emily’s daughter and is fortunate that she was wise enough to dump him.

Jaclyn asks Rachel why she didn’t fight hard for her to go to the finals. Rachel and Nick respond that this is a game and choosing Chris and Sarah gave them the best chance in winning the game. Rachel goes on to say how horrible she feels about what she did because Jaclyn means the world to her.

Chris. H. asks Chris if he regrets any of the game play and he says he doesn’t. Chris apologizes to Jamie for hurting her feelings but he can’t change what happened. Chris tells everyone to vote for Sarah, don’t vote for him if they don’t like him. Chris goes on to say that he doesn’t need anyone to tell him how bad he acted in the game because his family tells him everyday. I loved how honest and forthright Chris is and respect him for what he said, I can’t say the same for Jamie that had a sarcastic look on her face when Chris was pouring his heart out.

Chris H. asks Rachel if she trusts Nick and she says yes, in fact she does because they came together on the show and made an awesome friendship.

Nick and Rachel are called back on stage with their answers in hand and it’s time for the big reveal. Rachel chooses “share” and Nick before giving his answer tells everyone that it is almost ironic that nobody thought he would win, nobody cared about him and he got here all by himself. Nick goes on to say that Rachel didn’t want to be his partner, she wanted to leave him three times and only stuck it  out for Jaclyn not for him, he chooses “keep”. Wow, everyone is stunned, Nick gets up and takes a bow. Chis H. calls for order, everyone is cheering. Rachel tells off Nick and says that he is on the stage because of her, she goes on to call him disgusting. Nick gets up and tells everyone they were in the game to win $250,000.00 and so was he. Rachel is further devastated, another blow for her tonight. Nick goes on to say that if Rachel was in the partnership 100% then he would have shared the money with her, but all she could do was talk and cry about Michael.

Chris H. opens the floor and Jaclyn is the first one to speak, she says that Nick doesn’t deserve it. Kalon interrupts and says that nobody deserves it, it was a game and Nick well played the game. Tony asks Nick if he feels bad about his decision. Nick says he wasn’t out to hurt anybody, he just flew under the radar. Chris tells Rachel that he loves her to death, but Nick just won the game fairly. Michael says his heart breaks for Rachel, he broke her heart and now she is crushed further; Nick tells Michael to console Rachel if he wants to. The fans in the audience love that Nick won, they are all cheering. For the first time in Bachelor Pad history, there is one sole winner and it is Nick.

Nick and Rachel go backstage where she loses it and he tells her that he owes her nothing because she was never on board to be his partner. Rachel agrees that they were forced to be together and they vowed that they would share the money and she can’t believe that he took the money for himself. Nick leaves Rachel crying backstage, he gets into a limo and he’s gone laughing his way all the way to the bank.

Wow, that was an awesome ending. What do you think about what Nick did? Is it just a game, or should he have put Rachel’s feelings first? Sounds off your comments below and tells us what you thought about this shocking finale.