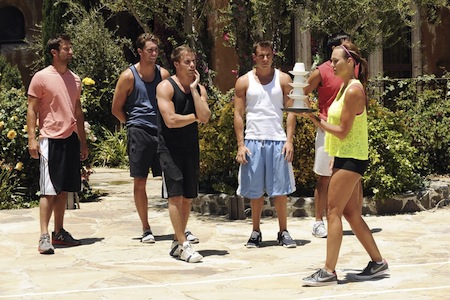 Last night, the Bachelor Pad did not disappoint. There was a healthy mixture of lying, cheating, and some really dumb women. Did you see the episode? If you missed it, you can read the full and detailed recap here.

The show opened up with Rachel crying like someone had died, but in reality this grown woman was crying because her boyfriend, Michael, of just a few weeks was voted off the show last week. There was no tsunami, he didn’t get swallowed up an alien life form, he simply got voted off the show and went home. Yet, the drama continued through the whole show last night until Rachel couldn’t take it anymore and during the Cocktail Party she actually called Michael.

This should have been reason enough for Chris Harrison to send her home and disqualify her from the game, but no, he did nothing. Then, in an even more shocking turn of events, Rachel tells everyone that she doesn’t want to be in the game anymore without Michael — the money is no longer worth it if she can’t be with her love. So do they send her home? Nope, they keep her for another week, and she’s now with Tony, a guy she has absolutely no interest in being with whatsoever. All this drama did was show us how stupid this woman is. Crying over a guy she has been seeing for a few weeks, acting like he literally died or something after he was sent home? Wow. Weak and pathetic.

As if that whole ordeal wasn’t dumb enough, Jaclyn had to “one up” the dumb meter with Ed. Even though Ed is sleeping in the same bed as Jaclyn, and yes they have had sex, he blurted out to everyone in the last episode that he is not on the show to hook up with anyone romantically. Jaclyn was really upset about what Ed said and you would think that alone would make her focus on the game, winning the money, and staying out of Ed’s bed. But no, Jaclyn and Ed won an overnight date where they both sat outside beside the water in a romantic setting where Ed came clean and confessed that he has been pursuing someone at home for a long time and it started turning into a relationship even though they broke it off before he came on the show. Ed confesses further that he still has feelings for the girl at home.

Jaclyn is completely shocked. She feels like she is always the girl that gets screwed over because she trusted Ed and feels both embarrassed and betrayed. At dinner, Jaclyn brings up the fact that she slept with Ed and she would not have done so if she had known that he had no intention of giving them a chance at a relationship. They continue to talk and Ed tells her that they sleep in the same bed, so he considers them a couple. For now. Jaclyn falls for it and heads upstairs to bed with Ed again. I told you she was dumber than Rachel!

Are you as shocked as I am at how dumb these two women acted? Sound off your comments below and tell me what you think about probably the two dumbest women ever in the world of reality TV.