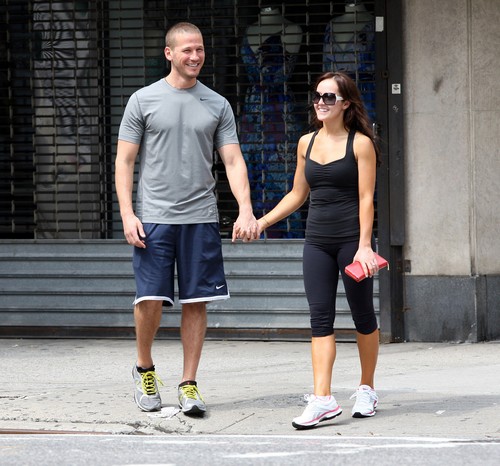 It looks like the almost-impossible has actually happened! I’m talking about the fact that a couple not only found love on ABC’s hit show The Bachelorette, but Ashley Hebert and J.P Rosenbaum actually took that stroll down the aisle and got married earlier today!  The two exchanged vows in front of nearly 300 guests at the Langham Hotel, which sits at the bottom of the San Gabriel Mountains in Pasadena, California. A good friend of Ashley’s spoke to Life & Style Magazine and said that, “Ashley looked gorgeous walking down the aisle! They seemed so happy and in love.”

I’m actually somewhat shocked. I’m used to these couples hooking up for awhile, some make it even a year, but the relationships that start on television seem to usually go down in flames. Ashley went on The Bachelorette last year hoping to find love after be bounced from her spot as a Bachelor contender the season before.  When Ashley came back to choose from her own personal stable of men, a few of the guys actually were disappointed to see that they were vying for her instead of someone hotter, like Emily Maynard. In the end it obviously all worked out great for Ashley, as J.P proposed to her on a private island back in May 2011 and rather than split, 18 months later they actually got hitched.

Are you surprised that Ashley and J.P. Actually went through with the wedding? Do you think they found real love on the reality show and might actually be the real deal? Tell us your thoughts in the comments below!