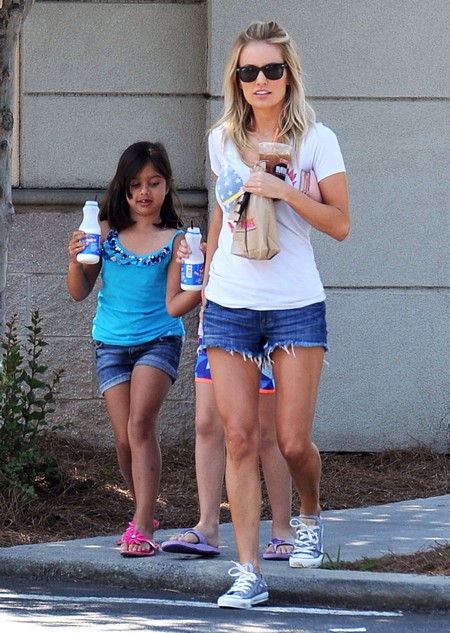 This season’s Bachelorette Emily Maynard is having a bitter feud with her deceased fiance Ricky Hendrick’s parents. Ricky Hendrick died in a plane crash in 2004 while Emily was pregnant with their daughter, Ricki.

Emily and her 6 year old daughter Ricki have been filmed on the show a lot. Her grandparents, Ricky’s parents are fuming mad that Emily is allowing there 6 year old granddaughter to be on the show. They don’t want her to be exploited or in the spotlight. They are very private people.

It’s also reported that they help support Emily and Ricki financially or at least they did. Now there not even on speaking terms.  When Emily was on the bachelor they supported her but they didn’t want her to do the show. She won Brad Womack’s heart the two got engaged for a brief period before their relationship fell apart. This sent her looking for love again.

Emily tried to please them by having the show filmed in her hometown of Charlotte, North Carolina so she didn’t have to uproot her daughter – but that didn’t do the trick. The show is usually filmed in Los Angeles.

Emily is reported to have found love and be engaged now but she can’t give any details until the season finale that airs on July 16.

Maybe by the time it airs everything will be ironed out for the sake of little Ricki – she needs a family together, not split up. At least Emily compromised by having the filming location changed.  Hopefully the Hendricks can cut her some slack.  Check out all our Bachelorette Recaps and Spoilers Here.