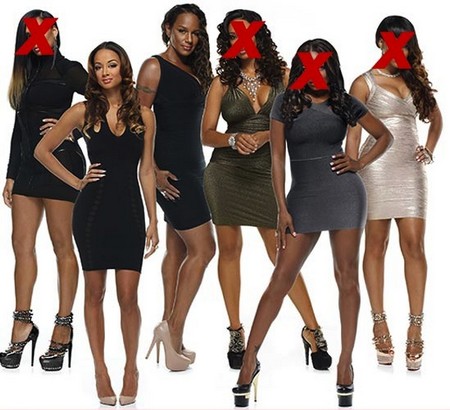 Basketball Wives: LA , the trashy baby cousin of Basketball Wives, will be losing four of its stars after its first season which premiered on August 29 on VH1. Of its half dozen stars the show will be saying goodbye to Malaysia Pargo, (wife of Atlanta Hawks player, Jannero Pargo), Brooke Bailey, (girlfriend of Vernon Macklin formerly of the Detroit Pistons), and sisters Laura Govan, (fiance of Gilbert Arenas of the Orlando Magic) and Gloria Govan, (wife of Matt Barnes of the Los Angeles Clippers).

Fans may remember Gloria Govan from her days on the original Basketballs set in Miami. Govan, whose husband Matt Barnes was playing for the Orlando Magic during season 1 of the reality show, found herself in conflict with fellow Wives Royce Reed, (ex-girlfriend of Dwight Howard of the Orlando Magic), Evelyn Lozada, (ex-wife of Chad Ochocinco currently a free agent), and executive producer of the program Shaunie O’Neal, (ex-wife of retired basketball legend Shaquille O’Neal. She was eventually shunned by the so-called inner circle before her LA relocation.

After moving with husband Barnes to Los Angeles when he was traded to the Clippers at the end of season 2 of Basketball Wives, Govan was cast in a spin off, Basketball Wive: LA. Sources connected to Wives: LA report to TMZ that the producers of the show pulled the plug on the four women because they weren’t committed to having “all of their reality filmed”.

Govan in particular. On both series Govan’s marriage to Barnes has been a hot matter of discussion. Apparently, Govan and Barnes snuck away to Las Vegas to elope and did not inform the show’s producers. After years of working with the couple the producers reportedly, “felt extremely disrespected by her actions and made the decision to clean house”.

And clean house they did releasing more than half of their cast. Shaunie O’neal and the other producers should have no problems replacing the wannabe starlets and filing those designer shoes. It can’t be that hard to find women who solely date professional athletes and who are willing to have their stories told through the universal medium of reality television.