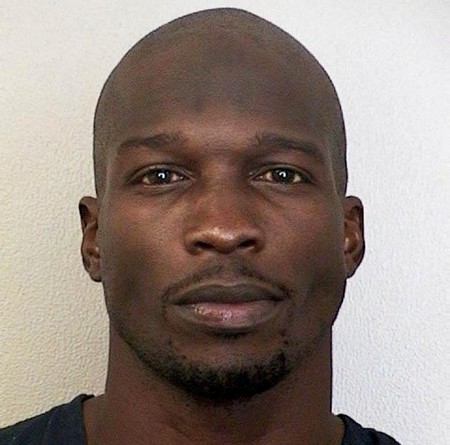 Chad ‘Ochocinco’ Johnson, the wide receiver for the Miami Dolphins was arrested for putting the smack-down on his brand new wife, Basketball Wives star, Evelyn Lozado on Saturday night following an argument between the couple. The argument was said to be about when Lozada found a receipt for condoms and confronted Johnson about it.

Sources in the law enforcement field in Florida say that Johnson allegedly head-butted Lozada during an argument leaving her with 3” lacerations on her forehead. According to the report, Lozada “fled on foot to a neighbor’s house to get away from Johnson.” The report goes on to say that Johnson drove around the neighborhood looking for Lozada, who had called police from the neighbor’s home. Sources are saying Lozada was at the hospital for several hours before getting discharged Sunday morning. Sources are saying Lozada will be staying with friends. Smart girl.

Johnson has been locked in the Broward County jail since last night following the vicious assault. Johnson’s bail has been set for $2,500 which I’m pretty sure he already paid and will be released shortly. Johnson has also been ordered not to have any contact with Lozada, which is common practice in domestic violence cases.

But if we are to believe Johnson at all, he told cops that Lozada was the one who head butted him. Yeah, sure she did. I’m pretty sure a woman of her small frame could head butt a pro-football player, but not split open her forehead. It was obviously done with force strong enough to come from Johnson.

I have absolutely no respect for any human that thinks they can get anywhere with violence. Johnson deserves to be discharged from the Dolphins and a harsher punishment, because you know he’ll probably not get anything that us normal civilians would get. Lozada, do yourself a favor to yourself, divorce his ass and take whatever money you can from him.

UPDATE: 10:37 pm edt – Sources close to Chad have told TMZ that the brute was ordered to a meeting with Miami Dolphins head coach Joe Philbin about an hour ago. The meeting must not have gone well — FOX Sports’ Jay Glazer is reporting the team dropped Johnson.

Good move on the Dolphin’s part – enough is enough with this entitled bum posing as a professional athlete.  If a player can’t maintain at least a minimal level of decency – and that would entail NOT splitting open their wife’s head when she catches them with a receipt for condoms – then fire their ass and drive them out of the sport.