Battle Between Jennifer Lopez and Nicki Minaj Heats Up 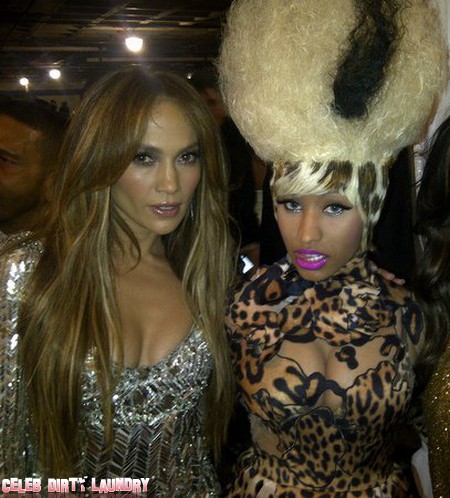 The battle of the butts between Jennifer Lopez and Nicki Minaj is getting cheeky.  The two fat-bottomed girls are engaged in a war of words stemming from last week’s American Idol show. Nicki suggested that she would make a good guest judge on Idol and asked Jennifer to scoot it on over a little bit.  Jennifer appeared to bristle and replied that due to Nicki’s gigantic butt there just might not be enough room!

Now Nicki has hit back in a recent interview.

Hollywood Hiccups Reports:  If you were watching American Idol earlier this week, you would be aware that Nicki Minaj performed on the show to promote her latest album, Pink Friday: Roman Reloaded, out on Tuesday. After her performance, the singer joked that next time she comes back, she wants to be guest judging and turned to Jennifer Lopez as she said: “I was hoping maybe I could come back and be a guest judge. J-Lo, can you scoot over a little bit?”.

Lopez fired back at Minaj saying: “I don’t know if there’s enough room for both of us,” referring to her donka-donk (her butt). Viewers said they thought the “tension” between the two was real despite them laughing it off. According to sources, neither of the stars are big fans of each other – possibly because they both have big assets and are very competitive when it comes to music sales.

Nicki noticed that Jen wasn’t too happy at her comment she made on the show as she spoke to The Hollywood Reporter: “She didn’t seem to be having it but she gonna have it! No, actually, I love J-Lo. I love what she’s done for pop culture, I have nothing but respect for her, and we were just joking around. I’m sure I’ll have lots of fun with them when I’m guest judging.”

Who would you rather see judging American Idol – Nicki or Jennifer?  I’d prefer Nicki, she is much more intelligent and controversial than J.Lo.  What about you?  Let us know in the comments below.