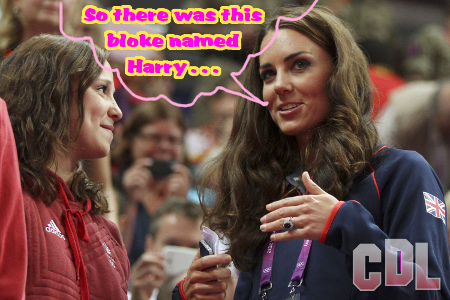 Before Kate Middleton love Prince William, she loved a man named Harry. Now, unfortunately, this Harry isn’t of any royal blood nor is he (at least we don’t think!) Prince William’s brother, Prince Harry. While we’d like nothing more than to report to you that Kate had a super sexy fling with the royal ginger, we just can’t force that much royal scandal onto the classiest couple in the world. But, that’s not the point. The point is . . . Kate Middleton was in love with another man!

Prior to enrolling for study at St. Andrews University, OK! Magazine reports that Kate took twelve-week art history and Italian language courses in Florence, Italy. Reportedly, Prince William was set to join the group and when our fave duchess learned of that news she didn’t get all worked up about it because he is, after all, only one of the most powerful princes in the world — and Kate Middleton isn’t one to let any prince get on her nerves!

During her time in Florence, Kate studied and took some time to foster her growing love for photography. However, she didn’t let silly things such as homework consume her life. She also spent a great deal of time at a bar called L’Art Bar.

“Italian men can be quite persuasive, but Catherine would never overreact to compliments. She definitely was not a giggly sort of girl batting her eyelashes!” a friend told the magazine. It wasn’t long before the students on the trip, including Kate, caught wind of Prince William’s arrival.

“The only time I even remember talking about William was when we found out he was coming to study in Florence, we would speculate about hanging out with him, but to be honest she never showed any interest in him or talked about him that much,” the friend told the magazine. “She certainly wasn’t going to St Andrews with the intention to snare him or anything like that. In fact she was more hung up on a guy called Harry, but things didn’t work out.”

How interesting, right? I wonder who this Harry bloke is? It would be fantastic if he would catch wind of this news and pop his little British head up out of obscurity to comment on his fling with Kate. Wonder who did the heartbreaking — him or her? For more juicy royal news click here.