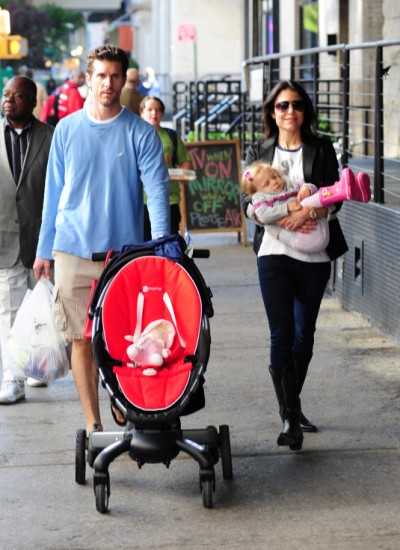 It turns out Bethenny Frankel might not be able to have it all after all since rumors are running wild that the Skinnygirl millionaire is divorcing her husband of two years, Jason Hoppy. It’s been no secret the two have been having problems since the entire season of her Bravo show, Bethenny Ever After, threw fight after fight in our faces. But it seems Jason’s had enough of Bethenny’s domineering ways and her wandering eye and is finally ready to call it quits.

RadarOnline.com reports Bethenny might be developing an inappropriate relationship with her Skinnygirl business partner, Matt Hesse. An eyewitness told Star magazine the two seemed a little too cozy while out to dinner three months ago. “They walked through the restaurant with his chest pressed up against her back, and she leaned back and he whispered in her ear,” the  eyewitness said. “Then, they went up the stairs to a private dining area together, literally with their arms wrapped around each other.”

And nice guy Jason can’t hold his feeling in any longer “Jason has said that when he is ready to officially file for divorce, he is ready to call Bethenny out on her infidelity and name Matt in the papers,” said the insider.

Matt has denied a relationship with Bethenny. If this story is true it could be costly for Bethenny who allegedly raked in $120 million for her sale of the Skinnygirl cocktail line. It would be a shame to lose any of it, especially the $100 million Star is reporting. But Jason obviously doesn’t feel that way. The source says he “feels absolutely entitled to half of her fortune. He feels betrayed and doesn’t care about Bethenny’s financial fallout once he gets what he wants. It’s all karma.”

See? Now, that’s where I don’t believe this story. I like Jason and I don’t think he’d be that vindictive especially since they have a baby involved. Bryn is two-years-old and it’s obvious her parents adore her. I can’t picture them fighting to the death if it would hurt her in any way. There have been rumors that these two have been divorcing since before they were married so I am going to choose not to believe this. Do you think it’s naive wishful thinking on my part?