Sandra Bullock’s New Romance Is With Another Bad Boy (Photo) 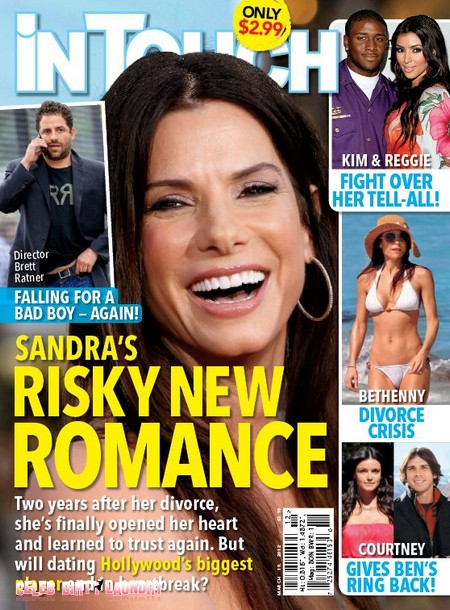 The new issue of In Touch features the cover story ‘Sandra’s Risky New Romance.’  The magazine claims that poor Sandra Bullock has a risky new romance with another bad boy.   Sandra was blind sided when news broke about the infidelity of her scoundrel of a ex-husband, Jesse James.  Poor Sandra was clearly oblivious to Jesse’s serial cheating and the magazine claims Sandra is putting her heart at risk again.

The yclaim that two years after her divorce to Jesse she’s finally opened her heart again and learned to trust again.  They wonder if dating hollywood’s biggest player is just setting herself up for another heartache.  The biggest player in question is director Brett Ratner, 42.

In Touch has the scoop: Sandra’s Risky New Romance – Cuddling with a new male companion at an after-hours party on Oscar night, Sandra Bullock looked happier than she’s been in nearly two years. “They definitely looked like they were more than just friends,” an eyewitness reveals, though Sandra’s rep denies the two are a pair. “They were together all night, and they ended up with a kiss.”

Celeb Dirty Laundry loves Sandra and we hope she can find happiness and does not get her heart stomped on again.  Also included in this week’s issue the magazine claims that Bethenny Frankel is turning the diva from hell, and her marriage to Jason Hoppy is suffering as a result.

To find out all the details of Sandra’s new romance, Bethenny’s divorce crisis and more, pick up the current issue of In Touch.