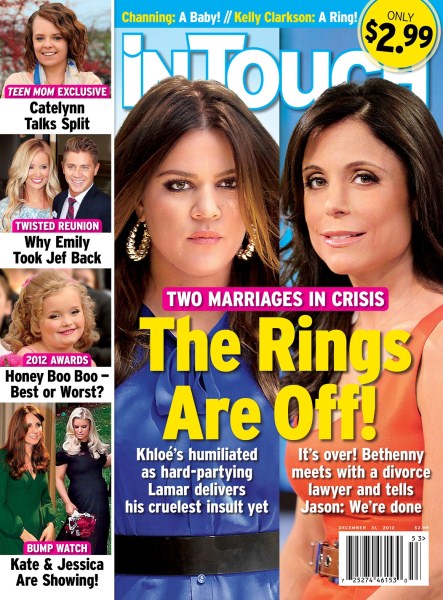 Will Khloe Kardashian-Odom be shortening her name soon?  It appears she has had enough and can not take any more.  After rumors of infidelity, a fight in court to get permission for his kids to be on the next season of Khloe and Lamar and his hard-partying ways, the gloves have come off.  Actually, it’s the rings that are off as Khloe has been spotted sans her matrimonial band.  Get the deets on the latest Khloe Kardashian-Odom and Lamar Odom split in this week’s issue of In Touch.

Are Bethenny Frankel and Jason Hoppy heading for divorce court?  “She’s meeting with lawyers and just figuring out the next steps. It’s over,” says a source close to the couple.  Apparently this move has been planned for months.  The reality star is set to make it official pretty soon as she was seen out and about without her wedding ring while spending time with the couples daughter Bryn.

Also in this issue, are Emily Maynard and Jef Holm back together again?  It would appear so.  The two were seen out in Charlotte, NC  this past week cozying up like a couple.  Were they trying to keep their reunion a secret from Emily’s other suitors?  Find out why Jef took Emily back even after dating other men.

Catelynn Lowell, of Teen Mom fame, talks about her split from long-time beau and former fiancé Tyler Baltierra.  Sadly, they have become another teen romance statistic.

Check out Honey Boo Boo’s best and worst of this year.  Don’t you just want to pinch those chubby cheeks?

Also, Kate Middleton and Jessica Simpson are showing!  Take a gander at the Duchess and former Daisy Duke in all of their maternity glory.

These stories and a whole lot more in this weeks issue of In Touch magazine.