Khloe Kardashian and Lamar Odom: Child Custody Court To Pimp His Kids On “Khloe and Lamar” 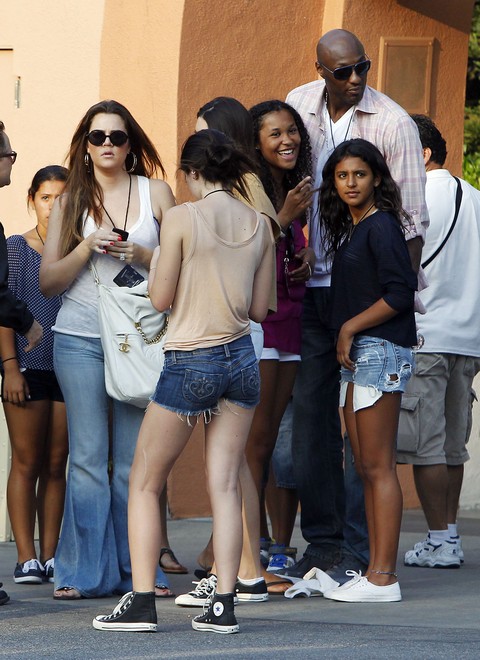 Like mother, like daughter.  Kris Jenner has set a fine example for her daughters. The Post is reporting that Lamar Odom, Khloe Kardashian-Odom’s husband, is taking his baby mama back to court for a custody agreement so that his children can appear on the next season of their reality TV show, Khloe and Lamar.  The LA Clipper, Odom, missed a court hearing on Friday in New York with his ex-gold-digger…I mean ex-girlfriend, Liza Morales, citing a back injury as the reason for his absence.  Lamar reportedly injured his tailbone during a basketball game and was promptly advised not to travel.

Of course, Lamar did not let things end with him as a no-show for the “parent access schedule” hearing.  Instead, he proactively scheduled a hearing via telephone to show that he is serious about having more time to see his kids; Destiny, 12 years old, and Lamar Jr., 9 years old.  According to sources, “Odom filed a petition to establish time sharing of the kids and agree on finances and child support.”  Basically Lamar is taking Liza to court to find out how much money it is going to take to allow the kids to appear on the show.  In 2010, Star magazine reported Liza as saying she would not allow the kids to appear on any reality TV show.

I am sure Khloe learned from the best, her mom Kris, and was able to hash out a sizeable paycheck for Miss Morales so that Lamar can have more time with his kids; though it is unknown if a settlement was actually reached.  Be on the lookout for the Odom children on the next season of Khloe and Lamar.

What do you think CDL readers?  Should Khloe and Lamar start whoring out the Odom children or should they wait to have little ones of their own?  Is Liza Morales a disgusting gold-digging baby mama or is she really worried about the welfare of her kids?