Kris Jenner Is Pimping Out Kendall Jenner And Kylie Jenner 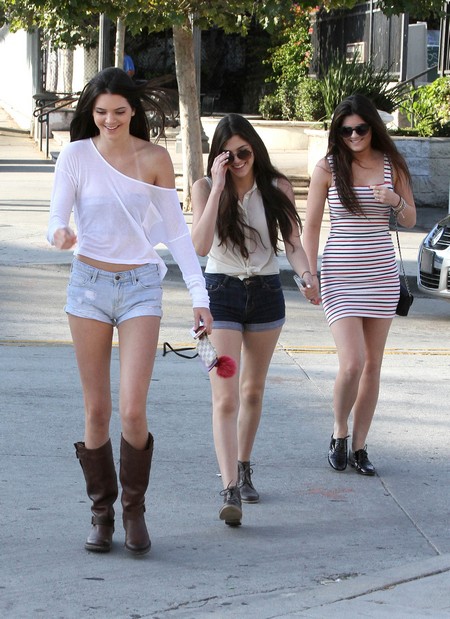 Kendall and Kylie Jenner are being pimped out by their momanager Kris Jenner with the collusion, or at least the cooperation, of the rest of the Kardashian/Jenner clan. Problem is that Kendall and Kylie are too young for this sort of treatment.

The young girls are still minors and yet Kris is using overt sexuality to promote them.  At a time when girls should be enjoying Girl Scouts and Justin Bieber, Kendall and Kylie are being groomed to become trashy famewhores just like their step sisters Kim, Kourtney, and Khloe Kardashian.  In fact poor Bruce Jenner has come close to leaving Kris over his fears that his little girls will be turned into promiscuous vixens like Kim.

Of course what else would you expect from the matriarch of a family that promoted a sex tape featuring daughter Kim Kardashian and Ray-J and then a 72-day marriage to Kris Humphries followed by a shocking divorce – all to boost their reality TV empire.  Kim said on Oprah ‘we don’t do anything for ratings’ but what she meant to say was ‘we don’t do anything if it isn’t for ratings.’

OK! Magazine, Print Edition, June 25 reveals more on the sad situation: In typical American families, parents display photos of their teenagers – innocent yearbook shots and department store portraits – on the mantel or along the stairway wall. But there is nothing typical about the Kardashians: matriarch momanager Kris Jenner is drawing fire for allowing Kendall, 16, and Kylie, 14 -her daughters with second husband Bruce Jenner – to be photographed in precociously sexy attire. Do a Google Image search and you’ll find pages of bare skin such as Kendall’s erotically-charged swimwear spreads for the Australian brand White Sands and Flavor, a Parisian magazine that has nothing to do with recipes.

Kris totally encourages it an insider says.  ”She’s proud that Kendall and Kylie are so sexy.” Big sister Kim Kardashian, who, after all, first earned fame in a sex video made with ex-boyfriend Ray-J, is proud, too.  “Kim sees nothing wrong with it,” the source says.  ”She actually took them for their first bikini wax when Kendal was 14 and Kylie was only 12!” But everyone is on board. “Khloe and Kourtney are starting to think it’s over the top,” the insider reveals.  “But Bruce Jenner is the most concerned. It makes him cringe.”

Maybe it’s all harmless. Or not.  “Look at Britney Spears or Lindsay Lohan or even Demi Lovato,” the insider tells OK! “They were way too sexy too young is has really wrecked them. Demi has come out of it but not without extreme therapy. No one wants to see Kendall and Kylie go through that sort of agony.

The Kardashian/Jenner clan, led by Kris, are simply filling a need that Americans have for trash.  If the clan can make a fortune being disgusting, and we insist on paying them for doing so, then we can’t blame them.  Look in the mirror folks.