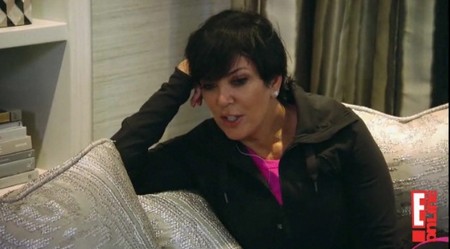 Tonight on E! is an all new episode of Keeping Up With The Karadshians. On tonight’s show Kris Jenner is going to run into the man she had an affair with more than 20 years ago. If you missed last week’s show called “The Family That Plays Together”, we have a full and detailed recap here for you.

In the previous episode Kim Kardashian just couldn’t take mom Kris’s grunting noises on the tennis court, she told dad Bruce that it sounded like Kris was in the bedroom not on the tennis court! In fact, Kim even made fun of Kris in front of the whole family and Kris told her to piss off and walked off the court. Did you see the episode?

Also in last week’s episode, Bruce overstepped his place as husband to Kris and tried to force her to manage his son Brendon, but little did Bruce know, Brendon didn’t want the hand out and all his effort was for nothing.

On tonight’s “Keep Up With The Kardashians” titled “The Man In The Memoir”  Kris runs into the man that she had the affair with over 20 years ago (that should really make Kourtney happy, not) and you won’t believe what Kris does, she considers arranging a meeting with him!  This is unbelievable since the primary reason her relationship was recently strained with Kourtney, was because of this affair.

Meanwhile, Kim hangs out with Scott which doesn’t please Kourtney in the least bit and Kylie and Kendall ruin Kris’ carpet which doesn’t sit well with her.

Tonight is going to be another crazy episode that you won’t want to miss, so be sure to tune in for our live coverage of E!’s “Keeping Up With The Kardashians” tonight at 9PM EST!  Meanwhile, while you wait for our recap hit the comments and let us know what you think of season 5 of “Keeping Up With The Kardashians” so far!  Check out the sneak peek video of tonight’s show below!

RECAP: Bruce is sending someone a text and Kim is disappointed that he doesn’t send her sex texts.

Scott asks Kourtney to go out to dinner and she typically goes to bed early and doesn’t want to go, she tells him to go and enjoy. Scott sometimes feels couped up and wants out.

Kourtney suggest that Kim go out with Scott, at least that way she will have an eye on him.

Kris is taking a tennis lesson with a proper instructor and it feels good that she can make any noise without anyone saying anything. Kim notices a man on a balcony, it’s Todd Waterman, the guy she left Robert for. Kris heads right up to the balcony and puts herself in front of Todd, but he doesn’t appear to want to talk to her. As Kris is leaving, Todd went over to talk to her. He tells her that a lot of what was said in her memoirs was misconstrued.

Kris calls her business associate, Noelle, and tells her that she bumped into Todd after 24 years.

Kourtney tells Scott that she made plans for him to go with Kim, Scott knows immediately that she wants him to be watched.

Kris gets home and goes right in to see Bruce. She tells him that she bumped into Todd Waterman.  Bruce is pissed off that she even spoke to him.

Kim tells Bruce exactly what happened and Bruce is shocked that she hugged him. Kim doesn’t feel like anything is wrong, she told Bruce the truth about what happened. Meanwhile, Bruce still thinks Todd is a scum bag.

Scott is out with Kim and thinks she is the most boring person ever, so he brought along a friend so he wouldn’t be bored. Meanwhile, Kim is determined for him to have fun. Scott is surprised at how much Kim has come along, she is actually fun now.

The next day, Scott tells Kourtney that he had fun they did some fun stuff on Chat Roulette and Kim flashed her bra to someone.

At Kris Jenner’s office, Noelle got an email from Todd, it only says “Snooka”, it was a nickname he had for her. Kris gets her to write back, “Hi Todd, it is strange I haven’t bumped into you in 24 years, life is great for both of us, I wish you all the best”.

Kris is at work, Todd wrote back again, he wants to meet up with her. Kris is happy now and in a real good place, she’s not sure if she wants to meet with him. Kris tells Noelle not to write back, she wants time to think about it.

Scott is in the car with Kim and never in a million years did he think that Kim would be his partner in crime for getting to go out.

Kris thinks she needs closure with Todd, she thinks she should probably meet with him, so she doesn’t have any regrets. Kris is upset, she is crying and wants to get this off of her chest

Scott is at a club with Kim, they are dancing and drinking, having a blast and Kourtney is texting them.

Kendall and Kyle are at home, Kendall spilled tomato sauce on the carpet and they know Kris is going to be mad because she has told them repeatedly not to eat in the living room.

Kris asks Kim if it is normal she has this crush on Alec Baldwin? Then she tells Kim that she got an email from Todd and wants to see him. Kim asks her if she is on crack, then tells her that if she wants to stay married, she better stay away from him.

Kendall and Kylie head out to get a carpet cleaning machine.

Scott slept in, Kourtney wants to know why he wouldn’t answer her texts but sent her lots of pics. Kourtney tells him that the party is over.

Kylie and Kendall are thrilled, the stain cam out, but oh no, they ripped the carpet a bit.

Kris is with Kourtney and Robert, Kourtney says she head that she bumped into Todd again. Kris tells them that he wants to meet her again, Kourtney lets her know that if she meets with him Bruce is going to be really upset. Kourtney is surprised that she wants to play with fire, this chapter in her life should be closed.

Bruce walks in and finds Kylie and Kendall looking very guilty. They tell Bruce the whole story and that they don’t want to tell Kris. Bruce tells them to be honest and take the wrath.

Kris is back, Kylie tells her that there is a little tear in the carpet in the living room. Kris is relatively still calm and Kylie takes her to look at it. Kris is actually not upset, she didn’t flip out like they thought she would.

Kris leaves the house, she doesn’t get mad at the girls because she is preoccupied with Todd on her mind. Kim and Robert realize what she is up to, they get in another car and follow her. Robert made a mistake, they lost her.

Kris arrives in a parking garage, the rest is to be continued to next week………………