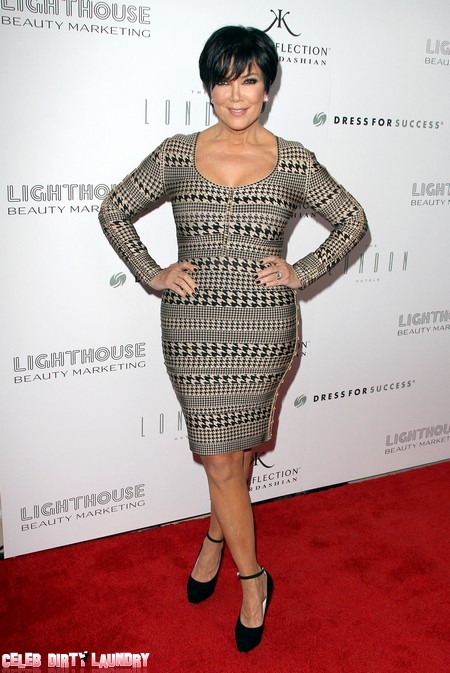 It seems that Momanager, Kris Jenner is in the doghouse as far as Kim Kardashian and Bruce Jenner are concerned – Khloe and Kourtney are also pissed at their mom.  But wait – we have to mention that Kendall Jenner and Kylie Jenner are also tired of being pimped out by their Momanager. Is there a mutiny in the offing…   Our intrepid Lisa explains:

Hi Kats – There are some disgruntled peeps in the Kardashian camp.  Oh where do I start?  Let’s start with the little ones, Kendall and Kyle.

Momanager Kris Jenner is now handling their career in full force.  Kendall, 16, and Kylie, 14, are both modeling now.  Even though the very young models wear suggestive and sexy things, they come from a family with money, so they don’t have to if they don’t want to.  But Oh no, their Momanager doesn’t see anything wrong with it (as long as it brings in the money and her 10%).

Honestly she reminds me of one of those pageant moms (give me a break!).  I don’t know if you’ve seen it chicadoodles (I don’t how you could have missed it), but they have this weird photo out looking like they’re two dark haired twins from the “Shining” movie.

Apparently the public are not the only ones that are having a problem with Mrs. Jenner, so is her husband, Bruce Jenner.  He does not like the way the girls’ careers are being handled.  Mrs. Kris could care less what he thinks which leads to many an argument and Mr. Bruce moved out for a minute.

Now he did come back to the house and you know what, I’m glad he did because he needs to be there to see and try to monitor what the heck is going on.  (Good for you Bruce, better to be half in the loop than out completely!)  That is a good and patient man because I don’t know how he does it.  (I think God is looking out for that man, seriously).

Now let’s talk about whom also has a beef with Kris Jenner.  No it can’t be the older Kardashian girls, Kim, Khloe and & Kourtney????  (Giggle)  Well yes it is!

SEE: The Kardashian Sisters Are Humiliated By Their Lovers

It seems that since Mama Kris has her hands full with the little ones she is not spending that much time with them.  But I don’t know if it is the time, I think it is more a matter of business opportunities.  Let’s face it, they are not so popular these days.  Khloe and her who was my baby daddy drama – plus her husband Lamar Odom being placed with a D rate team in the league.

Then there’s Kourtney going through the same drama she went through with her boyfriend Scott Disick like the first time she was pregnant. Kourtney face it: every time you get pregnant Scott acts up.  Actually I think he’s better this time than the first.  I just think you two need breaks away from each other once in a while when you’re pregnant.

Last but not least there’s Kim.  If that is not a hot mess I don’t know what is, (honestly!)  Firstly she is going through a highly public divorce that she is trying to settle quietly, (Oh sure like going on the Jay Leno Show the other night and bashing your soon to be ex), (Yeah Kim that’s quiet, sure). And where is her career? (Kittykats haven’t we all been trying to figure that one out for years, Hm….)

MORE: TV Divorce Will Ruin Kim Kardashian’s Life And Portray Her As A Monster

So you know what girls, don’t be angry if your Momanager wants to step away from the fire and concentrate her efforts where there might be some good new business.  Like you guys say all the time, “It’s all about the BRAND”, (and the money, come on who is kidding who).  Like I said before bad Kardashian Karma.