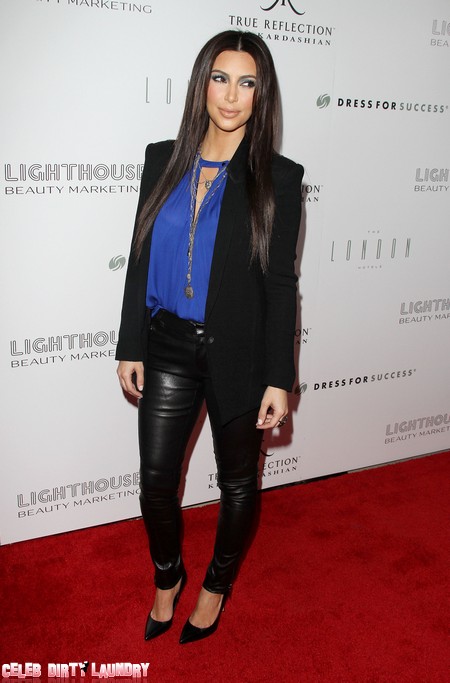 Kim Kardashian admits that dumping Kris Humphries after only 72 days of marriage has made her look like a monster and this has ruined her life.  Now Kim fears that her divorce proceedings will be televised and this will put the last nail in the coffin of her former popularity.  Kim is blaming Kris for starting the mud-slinging that has grown into an all-out publicity war between the two.

Kim claims that she used to be the most popular of the three Kardashian sisters but now she runs a distant third behind Khloe and Kourtney.  She thinks that it is her ugly divorce that has given other stars like Daniel Craig and Jon Hamm the liberty to ridicule her publicly.  Even her flour bombing can be attributed to her loss of status and respect.

When and if the divorce hits live TV and we see what a scheming fake Kim really is (like we don’t already…) then she will have to go into hiding.  Kris knows this – he knows Kim’s fear of publicity surrounding the divorce – and he is playing the ‘Live TV’ card to try to grab as much as he can from his ex-wife.  He is no better than she – two famewhores who deserved each other.

OK Mag reports about Kim’s dilemma:  “If they’d gone their separate ways without the mudslinging, she’s sure the public would have forgiven her by now,” says an insider.  “But Kim feels like Kris ruined her life by making her seem like a monster.”

“I didn’t think following my heart would create this much backlash,” admits Kim, 31, who was accustomed to being the most beloved of the three Kardashian sisters before her wedding to Kris. But since her televised fairy tale went up in smoke, she’s had to deal with the late-night TV jokes and public ridicule.

“It’s gotten so bad that even other celebrities, like Daniel Craig and Jon Hamm,  feel okay about insulting her, which is obviously very painful,” says the insider.

Kim has tried to make the best of it by throwing herself into her work and charity events, but her estranged husband’s unwillingness to quietly end their marriage has her worried about the additional damage a bitter divorce battle could do to her reputation.

It’s been reported that there are currently no settlement negotiations going on between the Kardashian and Humphries camps, setting the warring couple up for a public divorce battle this summer — an event that could even be televised!

If Kim’s divorce is on TV will you watch it?  Has your opinion of Kim deteriorated since she filed for divorce from Kris?  Let us know in the comments below.