Bethenny Frankel Pregnant: Baby And Divorce On The Way? 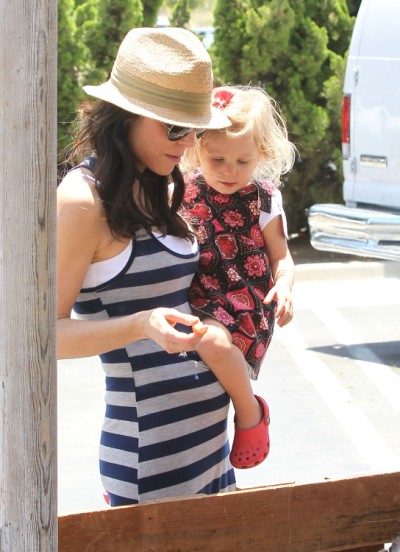 Does Bethenny Frankel’s happily ever after include another baby and a divorce? The Skinnygirl millionaire was spotted yesterday at a Malibu farmer’s market yesterday with a noticeable bump leaving some to believe the 41-year-old is pregnant with her second child.

Her two-year-old daughter, Bryn and husband, Jason Hoppy, accompanied her on the holiday weekend excursion. Rumors have abounded that Jason and Bethenny were announcing a split any day now but the couple looked happy and relaxed at the outing. But perhaps that was just the organic food. Fresh produce always makes me sweet until it makes me sour!

But HollywoodLife.com reports the marital discord is just a show to increase ratings and garner excitement for her new talk show. “Bethenny knows better than anyone how to work the media,” a source told HollywoodLife. “She’s doing this for TV ratings for Bethenny Ever After. She and Jason go through problems like any couple, she’s quite demanding — a total handful! They love each other and to be honest they are staying together for the sake of their daughter too. They’ll do anything they can to make sure they can have a happy family for Brynn. Bethenny knows that this publicity will help ratings. But when there’s smoke, there’s fire. They have problems, but as of now they’re together.”

Bethenny and her family are in L.A. for the next 6 weeks while she tapes the Ellen Degeneres-produced talk show and she’s been coy with her fans about the marital problems. She recently tweeted, “We’re going to talk about everything on my show! June 11 on Fox Broadcasting.”

If she adds a baby into the mix, the show is bound to be a success for the first nine months at least. Bethenny is very savvy that’s for sure. I don’t doubt she’s pregnant or, at the very least, trying to pretend she is because she knows people like me will write to my MILLIONS of ADORING fans about it. But does that turn you off? It sort of does me because it feels like everything Bethenny does is so calculated. Her big shtick is that she tells it like it is and she’s genuine but planning a baby around the start of a new talk show doesn’t seem genuine to me. It just feels staged and kinda sad.