Beware Of ‘The Master’: Scientology Attacked By Joaquin Phoenix (Video) 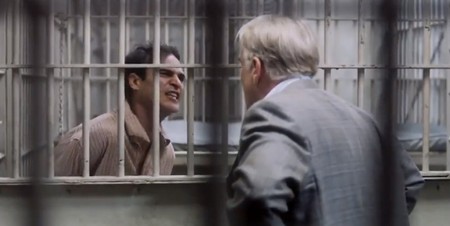 The Master is being released soon and it has been rumored as an anti-Scientology film. Joaquin Phoenix stars as the titular character, with this film seen as his big comeback to the acting world. We all know the bearded bug-eyed Joaquin has been a bit off the rails since his Johnny Cash embodiment in Walk the Line.

Step in Philip Seymour Hoffman, who has always been an outstanding method actor, as the crazed cult leader who resembles L. Ron Hubbard, the founder of Scientology. The recently released trailer has a line that eerily (or artistically) resembles the mad cult leader, “I am a writer, a doctor, a nuclear physicist, a theoretical philosopher, and above all, I am a man. A hopelessly inquisitive man, just like you.” Yes, someone drank too much of the Kool Aid.

Director Paul Thomas Anderson recently showed the film to the completely insane Tom Cruise and allegedly, Tom has some “issues” with the film. Well, why wouldn’t Tom have issues? The film is loosely based on the insanity of Scientology and Tom has not always been the most emotionally stable actor in Hollywood. Does anyone remember Oprah’s couch jumping saga? Who doesn’t…?

Scientology has been a defining Hollywood cult, with many actors such as Tom Cruise and John Travolta being absolutely obsessed with the “religion” and I use religion as loosely as possible in this sentence.

We’re excited for The Master. It takes a heap load of guts to take on Scientology in Hollywood and even though Paul Thomas Anderson has worked with Cruise before on Magnolia, it seems that this film might just cement what the world has always expected – Scientology is a money making cult which drives people insane.

What do you think readers? Do you also think Scientology is one loud heap of cray-cray? Will you watch this film? Let us know in the comments below.