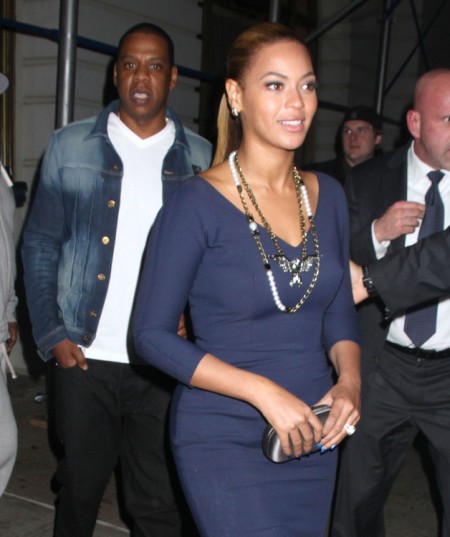 Beyonce and Jay-Z took in a Coldplay concert Sunday night in Manchester and the Crazy in Love singer couldn’t control her love for the British band, headbanging and flopping all over the place in what kind of looked like a seizure fit during the band’s rendition of Fix You. That’s my favorite Coldplay song!

Clearly, Beyonce is a fan of her bestie, Gwyneth Paltrow’s husband’s band. And thanks to a Coldplay fan who posted the video of Beyonce and Jay-Z on Youtube.com, we saw just how much of a fan. Her curls bounced around so much I thought her weave would fly straight off. She was enthusiastic to say the least. The Mirror posted the video and cited the guy who uploaded it as saying, “Beyonce, Jay & TyTy getting buck booty cray cray at Coldplay concert in Manchester. That’s my BB acting all crazy! Lol, I love that woman!'”

But is all that bopping around good for the baby? CDL reported Beyonce may be pregnant again but the singer has not confirmed it. I didn’t spy her drinking any alcohol in the video so the jury is still out!

But it’s really cute, right? That’s what I like about Beyonce so much – her appreciation for other artists. It reminds me of the time she sang Love on Top at the MTV Video Music Awards last year and the camera panned to Adele in the audience and she was singing along in the most fan-crazy, adorable way. It’s nice to see these mega-stars not only supporting each other but enjoying each other’s talents. This is so different from Christina Aguilera refusing to play nice with Justin Bieber when he was a guest on the X Factor. These major talents like Beyonce and Adele (and I thought Christina) don’t have to be shitty with each other because they’re confident that the music industry needs lots of different talents to make it really sing.

But the love fest is not stopping there for Beyonce, Jay-Z, Gwyenth and Chris Martin. Apparently the power couples are vacationing together in Florida this summer. How much I would love to be a part of that! Believe me, my gossip friends, I will be doing my damnedest to get you as much info from that vacation as I can!

Do you think Gwyneth headbangs? I bet Gwyenth would headbang if she saw Beyonce do it first!