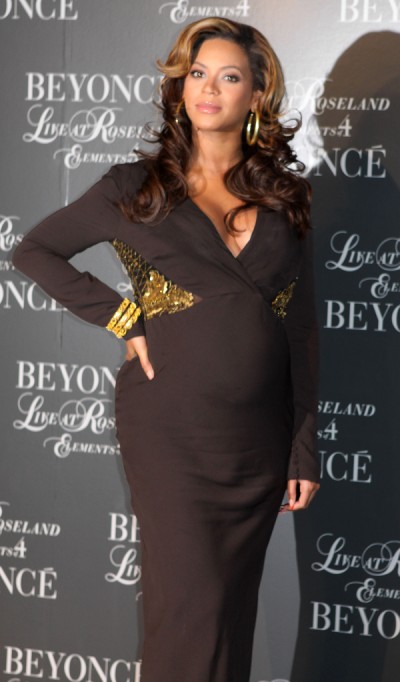 Beyonce and husband, Jay-Z, are pregnant with their second child. The Crazy in Love singer, and mother to 5-month-old Blue Ivy, is said to be about two months along with her newest bundle of joy.

MediaTakeOut.com reports that a source very close to the couple confirmed Beyonce will probably spill the baby beans about her new arrival sometime around the end of the summer. Although Beyonce hasn’t told the source flat out she was with child, he said there have been tell tale signs. Apparently the singer has put the kibosh on the drinking. “She didn’t drink any alcohol [for weeks] and we’ve ordered Petrus & Champagne multiple times. And Petrus is her favorite wine! It just wasn’t her.”

I don’t know about this one. It sounds like the source is pretty chummy with the mega star couple, but why knows? She just made that big deal out of losing 60 pounds to get back in shape for her 4-day mini-concert series in Atlantic City. She did tell the crowd she was so happy she was going to get “chocolate wasted” after her concert on the second night. Is that because the booze is a no no?

She came back from a 9-month hiatus and it seemed like Mama Beyonce was taking a back seat to Professional Beyonce for awhile. Unless it wasn’t planned….

There’s always a lot of snarky comparisons between Britney Spears and Beyonce. Personally I don’t think it’s fair. It’s like comparing John Stewart with Carrot Top. Sure they’re both comedians but they’re not really in the same category. But even I find it hard to believe Britney and Beyonce are the same age. Beyonce’s always acted more grounded and mature. But if she is pregnant again then she’s straight up pulling a Britney. She’s singing Britney’s “I thought you couldn’t get pregnant while you breastfeed” tune. Honey, you can. And you did. Britney’s mirror image kids are so close in age I sometimes forget they’re not twins.

Unless this was planned…. Maybe Beyonce is in full on mommy mode and wants to push out a couple before she goes back to work for reals and the mini-concert was just a way to remind people she’s still around. I don’t know. I just don’t know! Does it matter? No. Do I care way too much? Hells yes!

Do you think Beyonce could be breeding again? Does it gross you out it’s so soon after Blue Ivy?