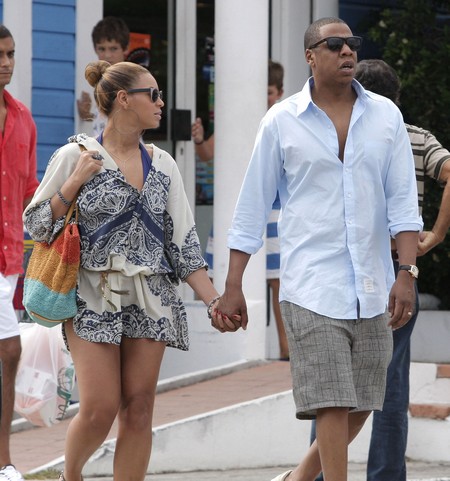 Although Beyonce reportedly told Jay-Z to keep Kim Kardashian away from her, Kris Jenner is plotting to get the parents of Blue Ivy Carter on the Kardashian/Jenner family reality TV show – Keeping Up with the Kardashians.   Jenner is a ruthless momanager and has pushed Kim on Kanye West since he brings with him a star’s cache – something that was totally lacking in Kris Humphries.   Humphries was good for a wedding, a 72-day marriage, and a nasty divorce but Kanye has  A-list connections mostly unavailable to the Kardashian/Jenner clan.

Am I implying that Jenner would impel Kim to go and seduce Kanye in order to bring him into the Kardashian/Jenner axis of evil?  Absolutely!  She had no problem encouraging her daughter to make and release the profitable and career boosting sex tape with Ray J.  Does Jenner have any problem pimping out her daughters, or herself, for the right price – well you decide.  CDL reported that Bruce Jenner was prepared to leave his wife permanently over the issue.

But back to Beyonce and Jay-Z… it might seem like a bit of stretch but by using Kanye as bait Jenner figures that she can lure the all-star A-list couple to her family’s reality TV show.

Kanye has a very close relationship Jay-Z since they collaborated on the album ‘Watch The Throne.’

“One of the main reasons she so approves of Kim and Kanye’s romance is the fact that Kanye has tons of celebrity friends,” a source told Hollywood Life: “Kris has her ways and it wouldn’t surprise me if the cameras captured Kim and Kanye on a double date with Beyonce and Jay-Z.”

The source claims Kris has already spoken to Kanye to convince him to ask his celebrity friends to take part. “Kris is doing her best to convince Kanye to arrange the double date. Believe me, it’s hard to say no to Kris!” the source added.

The Kardashian family just signed a new three-season, $40 million deal with the E! Network and Kris’ promises to bring in A-list guest stars helped close the deal.  Let’s watch and see – will Beyonce totally sell out and agree to appear on Keeping Up with the Kardashians?   What will become of Beyonce’s friendship with the queen of the snobs, the insufferable Gwyneth Paltrow if she does?  Let us know what you think in the comments below.