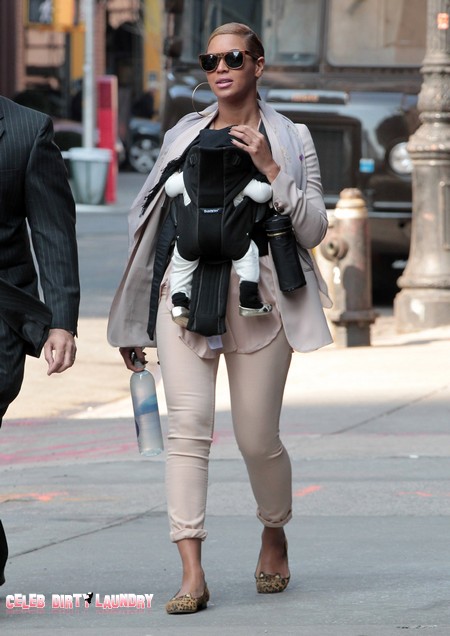 Beyonce Knowles will be back on the stage performing without The Notorious B.I.C. this May.  Being a mom is great but apparently singing in front of tens of thousands of enthusiastic fans is even better – besides Beyonce has a reputation and income to maintain!

Beyonce is also planning a girlie get-a-way with BFF Gwyneth Paltrow.  Unlike during mom’s concert touring it seems that little Blue Ivy will be welcome on this trip.  The two friends met through their respective husbands Jay-Z and Coldplay rocker Chris Martin and are believed to have hired a villa in Tuscany, Italy, for a luxury yoga-based break.

Beyonce is expected to take little Blue Ivy, while 39-year-old Gwyneth take her daughter Apple, seven, and son Moses, five, along for the trip.

A confidential source said: “They’re planning daily yoga sessions at the private five-star villa, which has its own pool.”

“Beyonce has also been taking her daughter Blue Ivy to baby yoga classes after Gwyneth recommended it, so they will spend some of the holiday doing that.   And the pair will get stuck into a menu of Gwyneth’s favourite organic grub while they are away.”

Ooh!  I bet the two moms can hardly bear the anticipation of this wild holiday.

Related: Beyonce Shows Off Her Post Pregancy Figure In NYC

Beyonce has been enjoying some time off following the birth of daughter Blue Ivy in January but she will make her live comeback over the Memorial Day weekend.  She will perform on three consecutive nights at the new Revel casino in Atlantic City, New Jersey, starting on May 25.

The mother of Blue Ivy’s last concerts before giving birth took place in August, when she played four dates at New York’s Roseland Ballroom to promote her latest album ‘4.’

Can Blue Ivy already do yoga?   What do you think?  Let us know in the comments below.