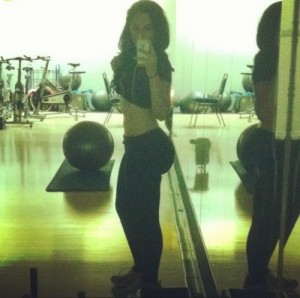 Meet Bianca Zuluaga, Chad Ochocinco’s girlfriend number three. I feel like we are talking Tiger Woods all over again, don’t you? Geez, there are now officially three mistresses revealed at this point so I have to wonder to wonder, how many more stay waiting in the wings for their name to be announced?

First let me just say that Mr. Ochocinco should have taken himself off of Twitter because that seems to be where he picked up his numerous mistresses including previously mentioned Beverly Shiner and Amber Priddy.

According to Radaronline.com, Miss Zuluaga was indeed one of the women that Chad picked up on the social networking site. So how does one pick up someone via Twitter?

A source told Radar about Chad’s Twitter charm saying, “He is constantly scouring Twitter flirting with women, and if he sees someone he likes he has them direct message their number to him so they can meet up in person.”

Apparently “Chad has been having an affair with another woman from Miami named Bianca Zuluaga for the past year” and Bianca is not shy about talking about her love for Chad via her Twitter account. The source added, “Whenever she refers to ‘chocolate’ in her tweets, she is talking about Chad and admits that she has ‘Jungle Fever’ and loves chocolate men.”

It was just two days before Chad said “I Do” to Evelyn Lozada that Bianca expressed her longing for Chad. She tweeted the following, “Some people on my Twitter need to stop hating my preference for chocolate!!!…I can’t take this anymore I need chocolate!!! My body is going into shock!”

The source went on to add that “Chad would mostly spend time with Bianca while Evelyn was out of town on her book tour or filming. They would even meet at David’s Café in Miami, which is one of his regular hangout joints and they didn’t go to any lengths to hide the fact that they were there together.” It seems as if Chad really didn’t try to hide any of his rendezvous with his Twitter women and even though Chad was with Evelyn, it didn’t stop Bianca from getting hers.

Well one thing is for certain, Chad Ochocinco’s girlfriend Bianca Zuluaga stays consistent with the line of women he has been with. If you’re brunette, a model and/or stripper and on Twitter and have a bountiful booty you could be the next woman to have your name called out via Radaronline!