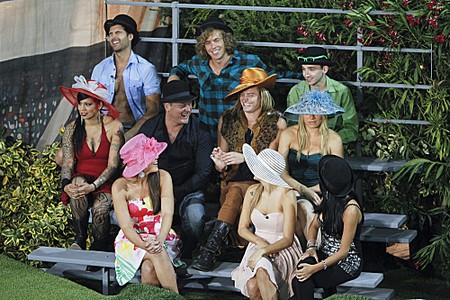 Big Brother returned for their 14 season last week and the premiere was as good as we expected. We can already see the usual backstabbing, drama and betrayal will be happening. I love the new concept of mentors and was glad to see Mike Boogie return. It is also great that the mentors will not be competing in the regular house-guest competitions.  If you missed last week’s episode you can read our full and detailed recap here.

Britney’s team won the competition and she chose Willie (Russell Hantz brother) to be the first head of household.  On tonight’s show we will find out who Willie, the current HOH, decides to put up for nomination. Although we already know who he puts up. SPOILER – if you do not want to know don’t read any further. The two people put up by Willie this week are Frank and Kara. A little surprising if you ask me!

Don’t forget most of what we see tonight on the show happened a couple of days ago, we get to see it all through the live feed. So you want you can eavesdrop on the house guests on the live feed.

Tune in tonight, our wait is over and another exciting and drama filled Big Brother is airing on CBS and you won’t want to miss it. So be sure to bookmark this spot, and come back for our live coverage of CBS’s Big Brother Week 1 Nomination Show at 8:00 PM EST! While you wait for our recap hit the comments and let us know what you think of  Big Brother 14 so far.

Tonight’s recap: Danielle is sad that Jodi had to leave but she is glad she is still in the house.  Boogie was not so sad that Jodi got eliminated because he did not spend much time getting to know her.  Wil says it has put things in reality, that the game has become.

Danielle likes Kara and she thinks they can go really far in the game, they are bonding.  Bookie meets Dan and asked if he is ready to take it to the end, the two are talking strategy, Mike is hoping Dan will help him get to that $100k. Janelle notices that Mike and Dan are working together and decides to align herself with Britney.

Willie shows around his HOH room to the rest of the house guests. Britney is working strategy with Willie, Shane and JoJo, plus Janelle’s three to bring it to six people so they have the vote.

Joe and Willie are thrilled, they think that they are going to make it all the way with Britney and Janelle teaming up for an alliance.

Willie is happy with his alliance, but he is also looking towards the other side so he has all sides covered. Willie starts talking strategy with Frank and tries to make an alliance with him as well. Frank gives his word to Willie, he won’t put him on the block next week if Willie saves him this week. Willie believes Frank, they make a deal.

Ian is creeping out Janelle, she can’t stand that he always has to move, while Wil also doesn’t like him and wants him gone. Danielle is further creeped out by Ian, she finds that he is always lurking in the bathroom just to see if he can get a peek. All of a sudden, Ian streaks in through the kitchen with only a small towel covering the front of himself, have no idea what inspired him to do that.

Frank spills his alliance with Willie to Mike, that sure didn’t last long.

Time for the competition, it’s a night at the races for the coaches. The coaches are all dressed up as jockeys, Britney looks like she is going to give birth to a horse. Britney and Mike are the first two coaches to play, they have to run down a slippery track, the first person to grab off the other coaches tail, wins that round. Mike wins the first round, Janelle the second; they head to the final round where one of them will win. Mike wins and Danielle is not impressed with how arrogant he was acting over winning. Mike gets to choose one house guest to save, he picks Ian.

Willie has to rethink his whole strategy, he wanted to put Ian up and Mike ruined that. Britney and Janelle want Willie to put up Frank, will Willie break his alliance with Frank?

Chef Joe is getting on everyone’s nerves; he makes food and then throws out the leftovers instead of offering it to the other house guests. Mike heads right into Willie’s HOH room and plants the seed that Joe should get taken out because he could self destruct if he were on the block. Meanwhile, Willie is enjoying all the attention he is getting as HOH; he better enjoy it while it lasts.

It’s time for Willie to put up his nominations; Kara is nervous and has good reason to be. Let’s see if Willie lives up to his brother and his brother’s reputation. Well, it appears that Willie does live up to it, he put up Frank, who he has an alliance with and Kara. Frank actually looks pissed, really? Frank already back stabbed Willie by spilling his alliance to Mike, did he forget that? Kara feels like crap, Frank is out for revenge. Britney is taking full credit for this nomination, she thinks Willie listened to her. Meanwhile, Mike threatens that Willie will have trouble coming his way for nominating one of his house guests.

That’s it for tonight, stay tuned Wednesday night for another fabulous episode!