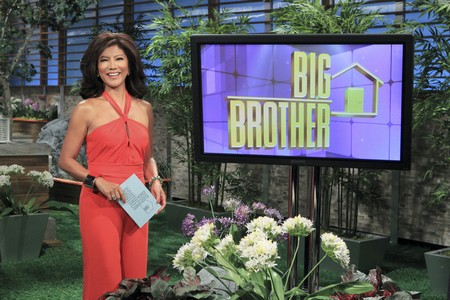 Finally, Big Brother is back with the premiere of season 14 tonight. Julie Chen will lead us into the new Big Brother house, with a new house design and introduce us to the new contestants.

What happens next is the contestants generally introduce themselves to each other and reveal their age and what they do for a living.  The question is, who is actually telling the truth?

This season will be particularly exciting as some Big Brother alums return back to the house. The returning players are: Britney, Janelle, Mike Boogie, and Dan. The returning players will not be competing against the other house-guests they will instead act as mentors.   Rumor has it the four returning players will be competing against each other for a cash prize.  Now it does not end there, the former player who leads the contest they are mentoring to victory will receive another cash prize.  Of course Julie will reveal  more about this twist tonight!

The NEW houseguests this season are: Jenn Arroyo, a 37-year-old musician from Brooklyn,   Joe Arvin, 41, a chef from Lexington, Ky and Frank Eudy, the 28-year-old unemployed son of wrestler Sid Vicious.

Shane Meaney, 26, a beer and wine salesman from Bennington, Vt.,  Kara Monaco, from Orlando, Fla., a 29-year-old model and former Playmate of the Year and  Danielle Murphree, 23, an Alabama nurse.

Finally, Jodi Rollins, 42, a server from Colorado,  JoJo Spatafora, 26, a bartender from Staten Island and Ian Terry, 21, an engineering student from Pittsburgh.

So stay tuned with us this season, we will be covering spoilers, recaps and every single piece of Big Brother news we get our hands on.

Tune in tonight, our wait is over and another exciting and drama filled season is beginning and you won’t want to miss it.  So be sure to bookmark this spot, and come back  for our live coverage of CBS’s Big Brother Season 14 premiere at 9:00 PM EST!  While you wait for our recap hit the comments and let us know if you are excited about the premiere of Big Brother 14.

RECAP: Tonight Big Brother is back with the best back stabbing and betrayal. A new group of house guests are entering the house with one thing in mind, winning the grand prize. Before the night is through, one house guest will be going home.

Four of the most competitive houseguests will be returning to coach the contestants. This season brings us a bizarre group of contestants; a girly girl nurse, a model, a rocker, a surfboarder, a professional chef, a mother of five that has run two marathons, a carpenter, a self-proclaimed genius, a spray tan technician and so much more.

Time to bring out the houseguests and it’s the first time that they are all seeing each other. The first four to enter the house are Wil, Ashley, Jodi and Frank. The next group is Ian, Shane, Jenn and Danielle. The final four to enter are Willie, Joe, Kara and JoJo.

The women all want to know right away if Ian is old enough to drink, he assures them he is 21. Ian figures out right from the start that Willie is related to Survivor’s Russell Hantz; how anyone can now figure it out is beyond me because they sound exactly the same.

It’s time to find out who is returning to the Big Brother house. Dan was the winner of Big Brother 10, Janelle was in Big Brother 6, Britney was from Big Brother 12 and Mike Boogie from Big Brother 2; they are all back! Julie Chen announces to the house guests that four of the best previous contestants will be joining them in the game to coach them instead of competing against them. Each coach will pick three house guests, if their house guest wins, they also win $100,000.00. The doorbell rings and Dan walks in, then Britney who finds the attention overwhelming, Mike Boogie is next and Ian announces he was 10 when Mike first appeared on Big Brother, Janelle is last and she has a history playing against Mike Boogie so it will be interesting to see if they butt heads.

Dan approaches Willie and asks if he is related to Russell Hantz, Willie denies it but that is not fooling Dan.

Julie Chen reminds the house guests that they received invitations to the Big Brother house and not keys because as she announces, there are only eleven keys to hand out, one house guest will be leaving the house tonight when the keys are earned. This also means that one coach will be a man down.

The teams are hopping across a bed to fetch a teddy bear, if they fall they are in trouble and it’s not easy because the mattresses are turning and teetering. Each team has to collect three teddy bears.

Mike Boogie’s team has their first bear. The game is hilarious and looks more like an episode of Wipeout. Britney’s team has two bears up but JoJo is having a rough time and it looks like they won’t be the team to win.

Britney’s team surprisingly does win, but this is also a race not to finish last because one house guest is going home. After 20 minutes, the coaches get to substitute a player to help them finish the game. Janelle’s team is second, Mike Boogie’s is third. Britney picks her HOH, it is Willie. Dan, as a coach of the last place team must decide who he is going to send out of the house and out of the game for good.

Dan is trying to decide between Jodi and Danielle, because he wants to keep Kara. Julie Chen announces that it is time for Dan’s decision, he picks to send home, Jodi.

That’s it for the first night of Big Brother 14, the game has officially begun. Tune in this Sunday for another episode.