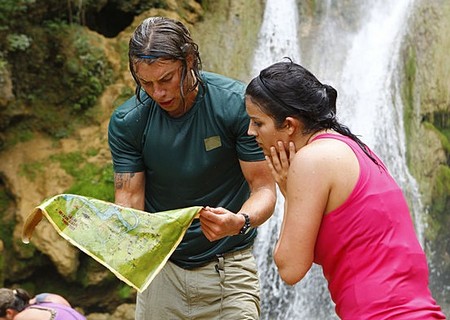 Tonight on NBC is an all new episode of Love In The Wild. On tonight’s show it’s all about swamps and tarantulas, do you think Jenny McCarthy will be tweeting again tonight during the episode? If you missed last week’s show, we have a full and detailed recap here for you.

On last weeks show, Jesse slept with Tara and some of the other people were not happy about it.  When Ali and Jesse partner up, she puts on the breaks right from the start, too much too soon according to Ali; this guy needs to start thinking about something other than making out with every girl. Ken was probably the most concerned about Jesse, especially when he and Ali won and were headed to the Oasis suite together.

Jesse and Ali had the power at the Couples Choice, they first get to choose their partners, but Ken interrupts. He tells them that some real relationships have been forming and he is concerned because Jesse because he thinks he is calculated and does not want him to break up his partnering with Yanina. Ali picks Ben to be her partner and he is shocked. Jesse was going to dismiss himself to the unmatched area, but he picks Michelle instead. Jenna and Ryan stay together. Ken and Yanina also stay together. It’s down to the final four, Summer and Chase are next. Jason and Vanessa are the last two and they are eliminated. Final Couples; Ali & Ben, Jesse & Michelle, Jenna & Ryan, Ken & Yanina and Summer & Chase.

On tonight’s show the couples have to build an outrigger to navigate the seas, they also travel through a swamp and meet up with some nasty tarantulas. At the elimination ceremony, one of the couples makes a very surprising sacrifice.

Tonight’s episode is going to be a drama filled episode that you won’t want to miss, so be sure to tune in for our live coverage NBC’s Love In The Wild at 10 PM EST!  While you wait for our recap hit the comments and let us know what you think of Love In The Wild season 2, so far and enjoy the preview.

RECAP: After the Couple’s Choice Ceremony, the couples head to their sleeping quarters. Ali apologizes for taking Ben and Michelle tells her that she is fuming and the only time that she won’t be with Ben is when he is sleeping. Ken lashes out at Jesse about what he did to Tara, Jesse walks away and tells Ken that if he follows him, he is going to break a chair over his head. Ben steps in and beaks it up before it gets messy.

Ken is really worried that Jesse can hurt his relationship with Yanina, but she tells Ken to concentrate more on them and less on Jesse. The next day, Ryan is feeling like crap and can’t keep anything down. Jenna is being super supportive but she questions about whether there is an x factor between them.

Time for a new challenge, the couples are going to be tested on how to be able to deal with fear. At the shore, they have to take the bamboo inside their boats and turn them into an outrigger. The first couple to finish and cross the finish line, wins.

Ben and Ali are off to a tough start when Ben asks Ali to tie the knots. Ken is really motivated, primarily because Jesse pissed him and he wants to win. Summer and Chase are in the lead, they are at the first part of the clue that they have to bring to the finish line. Summer really likes that Chase is a take charge kind of guy. Meanwhile, Ken and Yanina are not performing as well as they wanted to. Ben and Ali are in last place, she doesn’t like heights and is having a hard time with the challenge.

Ben is really worried that he is going to go home because of Ali slowing him down. Jessee and Michelle got themselves into second place. Ken is getting to see Yanina in a whole new light in this challenge, she is bossy and he’s not so sure if he can handle a girl like this.

Summer and Chase are thrilled to be in the Oasis while Ken and Yanina are re-bonding in the cabins. Ryan and Jenna are taking it slow while he tries to recuperate from being sick.

Summer and Chase share their first kiss and she is thrilled that he is a good kisser. Ben is not ready to go home, he is with Michelle and gives her a wooden turtle as a token.

The next day, Jesse confesses to Ali that he liked her from day one, but she doesn’t share his feelings which only leaves him frustrated.

Since Ken and Yanina couldn’t get first place and into the Oasis, so they decide to have their own spa day and give each other facials.

Ben describes Ali as a “Black Widow”, but she doesn’t care and says that he obviously prefers Michelle “the blow up doll”.

At the Couple’s Choice Ceremony, Summer and Chase get to decide whether they want to stay together or choose new partners, who cannot deny them, they choose to stay together.

Jesse gets to decide whether he would like to stay with Michelle or switch, he leaves the honor to Michelle and she decides to switch with Ben who is very eager to accept.

Yanina and Ken are next, they decide to stay together.

Ryan and Jenna are the last couple, Ryan decides to stay with her but before she can answer she wants to set something straight with him. Jenna tells him that he is everything that she would want in a guy, but right now, they would be better off as friends. Ryan decides for the couple, the two head to the unmatched area.

Ali gets the final choice, to decide between Ryan and Jesse, she chooses neither and decides that it’s her time to leave. Since nobody wants to continue with the adventure, all four of them are eliminated.