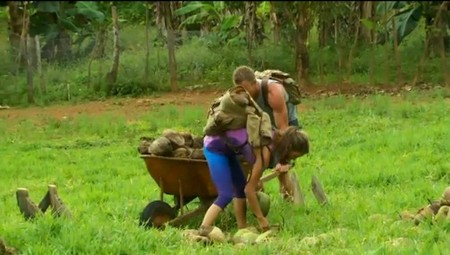 Tonight on NBC is an all new episode of Love In The Wild.  On tonight’s show it’s all about the coconuts, do you think Jenny McCarthy will be tweeting again tonight during the episode?  If you missed last week’s show, we have a full and detailed recap here for you.

On last weeks show six new women were introduced and the shake up began. This time, the guys got to pick a girl to make themselves a trio instead of a couple and during the challenge, all three were shackled together.

Ben, Jenny and Michelle arrived in first place and stayed in the Oasis as well, they shared a romantic cruise. At the end of the show, the men sent one woman packing and some of them shook up their partners, here were the final pairings; Michelle & Ben, Ken & Yanina, Ryan & Jenna, Jason & Vanessa, Chase & Summer, Jessie & Ali.

On tonight’s shown Jessee and new partner, Ali, have to haul 55 coconuts with a wheelbarrow and “muscle man” Jessee thinks he can do it one trip.  No surprise that the wheel on the wheelbarrow brakes but the question is, does this make them lose their first place and land dead last? If so, I see another meltdown coming for Ali!

Tonight’s episode is going to be a drama filled episode that you won’t want to miss, so be sure to tune in for our live coverage NBC’s Love In The Wild at 10 PM EST!  While you wait for our recap hit the comments and let us know what you think of Love In The Wild season 2, so far and enjoy the preview.

RECAP: Jessee slept with Tara and other people  are not happy about it. Michelle and Ben are happy together, they really get along well. Vanessa and Jason are happy to have the chance to get to know each other. Yanina and Ken get into bed right away, they cuddle and kiss.

Ali and Jessee are outside sleeping and Ali puts on the breaks right from the start, too much too soon.

Time for the challenge and it involves coconuts. The couples have to collect 55 coconuts and carry them along a long dirt road where they will trade them for a horse that will lead them to the map. To help carry the coconuts each couple gets a wheelbarrow but they have to build it first.

Ryan and Jenna are the first one to arrive at the horses, but they don’t have enough coconuts and have to return. Jessee decided to take all the coconuts in one trip and breaks the wheelbarrow.

The hardest part for most of the teams is that they have to go back for a second batch of coconuts. Vanessa and Jason are the first one to actually collect their coconuts and trade them in for a horse. Jessee and Ali are in third place, carrying all the coconuts at once certainly helped.

Summer and Chase got a fast horse, they pass all the teams and are now in first place. Teams now have to cross a waterfall by ropes, Ken and Yanina have taken the lead, but Summer and Chase are not far behind. Jenna and Ryan are in third place.

The map tells the teams that they have to head to the top of the waterfall, there is a machete there that they need to use to get some bananas and bring them to the finish line.

Summer and Chase along with Jenna and Ryan are so intent on being in first and second place that they fail to retrieve the machete before going to the bananas.

Jenna and Ryan are now in first place. Summer and Chase are now in fifth place and are concerned about coming in last. Jason and Vanessa are filled with a new energy when they see that they are not necessarily last any more.

Ali and Jesse are in first place, Ali says the lean to gave her inspiration but she is unsettelled that she will have to spend time in the romantic Oases with Jessee.

Summer and Chase arrive in fifth place, they are sleeping in a tent. Vanessa and Jason are in last place, they sleep in the lean to, the good news is there is no more lean to and they will be staying in one of the tents.

Michelle loves being with Ben, he really makes her smile, there is definitely chemistry between them. Vanessa is upset that she could be eliminated but on the other hand, she has a connection with Jason.

At the Oases, Jesse wants to know if Ali has feelings for him, she describes him as “the one night stand that really just won’t go away”. Jesse believes that Ali screwed her by not telling her upfront that she doesn’t want to get romantically involved with him.

Jason is really into Vanessa and she is also starting to feel a connection. Vanessa confides in Jason that her father recently passed away from lung cancer and Jason is thrilled that she confided in him.

Ken is really concerned about Couples Choice because Jesse has the power tonight.

Ali and Jesse are first, but Ken interrupts. He tells them that some real relationships have been forming and he concerned because Jesse is calculated and he doesn’t him to break up his partnering with Yanina. Ali picks Ben to be her partner and he is shocked. Jesse was going to dismiss himself to the unmatched area, but he picks Michelle instead. Jenna and Ryan stay together. Ken and Yanina also stay together. It’s down to the final four, Summer and Chase are next. Jason and Vanessa are the last two and they are eliminated.