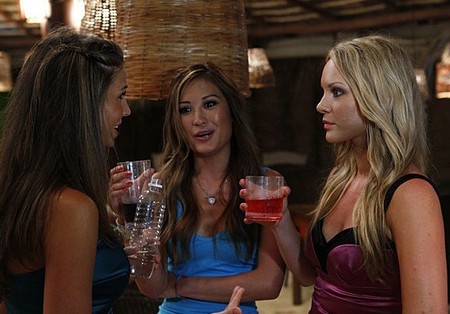 Tonight on NBC is an all new episode of Love In The Wild. On tonight’s show Jenny McCarthey will be live tweeting during the episode. If you missed last week’s show, we have a full and detailed recap here for you.

On last weeks show the couples jumped off a 40-foot cliff into murky water during their first challenge as duos. After the eliminations, a surprise twist made the singles reconsider their choices.

At the end of last week’s show Jenny McCarthy spices up the party by introducing six new single women into the mix. The guys can sense it’s now their turn to be the focal point of a trio, while the girls understand these new additions are here to steal their men.

All Jenny McCarthy can add is that this is going to get good. Shauna and Tim were the two contestants sent home last week.

On tonight’s show the trios are chained together during a journey through the jungle and a bat cave. The winners go on a sailboat cruise, while the elimination ceremony sends six women home.

Tonight’s episode is going to be a drama filled episode that you won’t want to miss, so be sure to tune in for our live coverage NBC’s Love In The Wild at 9 PM EST!  While you wait for our recap hit the comments and let us know what you think of Love In The Wild season 2, so far!

RECAP: Last week six new women were introduced and the shake begins tonight.  Tonight the guys get to pick a girl to make it a trio.

The new trios are:

Jenny tries to make her territory and Michelle will have nothing to do with it. Ken shows off their tent to Lindsay and he feels sorry for her because he has coupled up with Yanina. Jessie decides to sleep on the floor and be a gentleman, he lets the two women sleep in the bed together.

The next day the trios meet on the beach for their next challenge.  In this adventure the teams will be shackled together as a trio.

Ben, Jenny & Michelle are in first place – but Jenny doesn’t want to win because she doesn’t want to sleep in the Oasis with big boob girl. The teams are scrambling to climb trees to get supplies. When they arrive at the cave, one girl has to break free of the chains and only a couple goes into the cave, to kiss.

In the cave, the couples have to open a chest, Ben & Jenny are still first but there is a problem, they have gone on but forgot the map. The light bulb goes off in Ben’s head, he knows Jenny sabotaged them.

Chase & Ali are dead last and know they need to make up ground. Meanwhile, Ben and his girls are still in the lead. Jesse and his trio are second place, but it’s not good enough because Chase and his team are already running to the finish line.

Chase and his trio made up some time and it appears they won’t be last.

Ben, Jenny & Michelle will be staying in the Oasis and head out on a luxury sail boat for a cruise. Ken, Yanina and Lindsay are second and will be in the cabins. Ryan, Summer and Natalie are third. Jason, Cena and Vanessa are fourth. Chase, Ali and Jenna are fifth and couldn’t be happier about it. The last trio is Tara, Jessie and Melissa, they will be spending the night in the lean to.

There is an awkward tension between the new girls and the old girls and Ali seems to be causing the majority of it. Meanwhile, Ben and Michelle are playing pool and she is really trying to hit on him, but it doesn’t appear that he is biting. Over at the cabins, Jessee wants to be paired up with Ali and he’s not being shy about it.

Ryan has the hots for Jenna, if there is a shake up tonight, I can see these two pairing up.

Jessee speaks candidly with Tara, he tells her that his ultimate goal is to be paired up wth Ali. Tara is upset because in her mind they had intimate relations. Ben is undecided, he really has no idea who he is going to pick.

It’s time for Ben to choose one of the women from the trio, or any other women. Ben decides to choose Michelle and Jenny is pissed. Time for Ken to pick one of his two girls, he picks Yanina. Ryan picks Natalie. Jason picks Vanessa. Chase picks Ali. Jessie picks Tara, only because she picked him in the first ceremony.

The final couples are:

That’s it for tonight, stay tuned next week to find out which couple gets the Oasis suite!