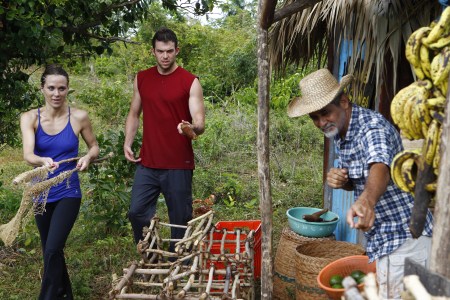 Tonight on NBC is an all new episode of Love In The Wild. On tonight’s show The trios are chained together during a journey and a bat cave.  If you missed last week’s show, we have a full and detailed recap here for you.  On last week’s episode we got to meet the new host Jenny McCarthy and the the couples were paired off and thrown in the wild. There is new twist this season the accommodations will be based on their performances – so from bad to worse they may have very bad accommodations.

Tara has enough of Jessie and says that he is “the one night stand that won’t go away”. Do you think that maybe she is have second thoughts about picking him over Leo?

Meanwhile, Ken can’t keep his hands of Yanina and the claws come out when Tara declares that she always gets what she wants while Shauna declares there is a freaking psycho among them!

Based on the synopsis, there will be more trios? Hold on, the extra men went home in the last episode, so does this men that 7 new wild card women will be brought on the show? My guess is a YES, how else will they send six women home.

Stay tuned for our live coverage of the show tonight at 10PM EST! Meanwhile, while you wait hit the comments and let us know what you think of Season 2 of “Live In The Wild” so far!

RECAP: Tonight the seven remaining couples will have to face the most harrowing challenges as their search for love continues in this week’s adventure.

Time for the second adventure, on this journey they are going to encounter a very old farmer that has information they will need to complete this adventure. In order to move one, one team mate must make out with the farmer, joke! The first thing they need to do is build a net and they will need it to complete the adventure. A reminder, the worse they place, the worse their accommodations.

Cina hurts her leg while they are making the net, the first team with the lead is Ali & Chase. Shauna & Ryan are having a hard time trying to find the net and everyone has moved on.

Ali is terrified of heights and Chase wants her to go first to jump off a cliff into the water to just get it over with. Chase pushes Ali, then jumps in after her. Summer & Tim are next, they jump at the same time. Meanwhile, Cina is totally freaking out and makes Jason go first. Jenny & Ben are fifth with Yanin & Ken next.

Ali & Chase greet the farmer, they need to catch a guinea fowl and it begins to rain. Tara & Jessie are next but the farmer won’t take the guinea fowl, because it’s the wrong animal. Ryan is really fed up with Shauna, her nagging him is really getting on his nerves. Meanwhile, Ben is so frustrated that he can’t catch the fowl and throws the net.

Ali & Chase are the first couple to get their map and move on.

Ali & Chase are the first couple to finish their adventure and get gifted with a rest in the Oasis tonight. Summer & Tim are second, Tara & Jessie are Third, Cina & Jason are fourth,  Yanina & Ken are fourth and will be camping out with S hauna & Ryan who are in six place but Ryan doesn’t care because he’s not that into her anyway.

Jenny & Ben are last and that means they are sleeping out doors.

Ali & Chase are thrilled to be in the Oasis, meanwhile Jenny is upset that there has been no romance with Ben and tries to go for it but he doesn’t budge. Tara & Jessee have a bond and there is no lack of intimacy between the two. Summer & Tim are getting along well and so are Yanina & Ken.

Shauna goes in search of Ryan and he tells her that he hasn’t felt a huge spark with her. Shauna is upset, but Ryan says that he can’t force a connection between the two.

Ali & Chase won the challenge, so they get to have a reward – it’s a ride in a gondola and Ali starts to cry because she is afraid of heights.

Later in the evening, everyone is drinking and getting rowdy when Tim throws cake in Summer’s hair and she is not impressed. Meanwhile, Ben is nervous because they arrived last, he is afraid he can get voted out so he starts to cozy up to Shauna.

In bed, Summer tells Tim that it was not ok for him to put cake in her hair.

The Couples Choice ceremony is coming up, Jenny is terrified that she could be getting the boot.

Tonight the couples get to choose another partner if they want. Chase sticks with Ali and she stays with him.

Time for a surprise, in walks six of the sluttiest looking girls to steal the men away from their women. But, we won’t get to see what happens until next week.