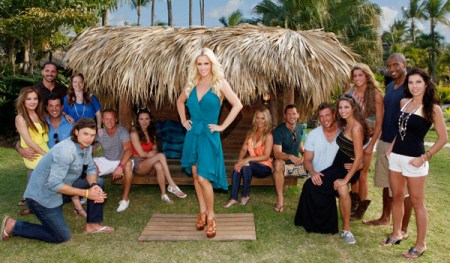 Tonight ‘Love in the Wild’ returns on NBC with season 2 and their new host, Jenny McCarthy. The location this season that replaces Costa Rica, is the beautiful Dominican Republic. There will be wild adventures, lots of drama, hearts will be broken, a few cat fights here and there and plenty of surprising twists. Stand by as we live blog the episode with all the juicy details.

Starting tonight, the singles; men and women, will partner up and push themselves to their ultimate limits. There will be some “wild” card men to pair up with the couples, I got a feeling it’s going to be “three’s a crowd”.

The winning couple will stay in a luxurious five star room, the “Oasis”, while the other couples tough it out in cabins, tents and even some other primitive accommodations.

We will be live blogging ‘Love in the Wild’ tonight with all the up-to-the-minute details at 9PM EST so make sure to come back to this spot and watch the show with us. Refresh often to get the most up-to-date results! While you wait for the recap you can check out a sneak peek video, some spoilers and full cast details for tonight’s episode here.

RECAP: Tonight the couples will be paired off and thrown in the wild and along the way they will get to choose different partners. Each week, at least one man and one woman will be sent home.

Jenny welcomes the men and women to their journey telling them that that last year’s winners and runner up, are still together.

The women got to choose their guys ahead of time, here are their choices:

This season there is new twist, Jenny tells about the accomdations, that it’s based on their performance in the adventure, from great to disgusting.

The legend behind the conch hell says that it calls to those who search for true love. The trios have to find three of those shells and first they must locate the map, which is located in backpacks that a helicopter drops into the water. One person from each trio, must swim out and get it.

Summer was the only women to volunteer to swim out and she is in the lead. Yanina, Mike & Ken are team number one and follow the map to a well full of snakes. The men let down Yanina , then Summer is the next women lowered in the well. Summer is the first person to find her shell putting her team in the first spot, then Yanina follows with the second shell for her team.

Ali, Jason & Darwin are the last time and Ali thinks there is nothing sexy about it.

Tara almost has a heart attack when she sees the well full of snakes.

Shauna is also freaking out, the two are completely dreaking out and Shauna is thrilled that she found her shell, she literally runs out of there.

Summer is still in the lead, her men have to now throw coconuts to break a clay mask and retrieve another map, Jesse does it and according to the map, he gets to kiss Summer while Quaison takes a photo.

Tim thinks he gave Tara the best five seconds of her life when he kissed her, but she wasn’t impressed.

Shauna’s team had to return to the snake pit because they dropped the map.

Summer and her team is still in the lead, they to get back to the beach and retrieve another shell from the beach. The team heads out in a boat with Yanina and her team right behind them.

The waves are high and the boat that Summer’s team in sinks.

Yanina’s team sink as well but Ken dives under and gets the shell. Meanwhile, Jenny is not impessed with Frankie, he couldn’t through the cocunut but she loves kissing Ben.

Shauna and her team are in fifth place with her whining like crazy and driving Christian crazy, he says Ryan is welcome to take her off his hands.

Summer, Jesse and Q are still in first place, the last shell is up on top of a tall poll that Jessee climbs; they are the first team to finish and win, so they will be staying at the luxurious Oasis.

Yanina, Ken & Mike came in second, Tara, Tim & Leo are in third place and Cina, Chase & Jason are fourth, they will all be staying in the cabins.

Ali, Jason & Darwin are last and will be staying in the worst conditions, it will be a rough night.

Summer and her team are so impressed with the Oasis, they are popping bottles while their personal chef prepares dinner. They take a tour of the house, there is only one bed and three people.

Meanwhile, the cabins are cute and they have a pool. Again, there is one large bed for three.

The rugged conditions are tents and Shauna starts to freak out with there is a spider inside.

Ali’s team get sleeping bags and nothing else. Jason is talking to Ali, she is having an anxiety attack because she is so far beyond her comfort zone.

It’s time for pool time and Leo is prancing around in his little undies which is not impressing Tara one bit. Mike is really moving in on Yanina, while Summer takes the time to check out the other guys.

Time to work out the sleep situation and Summer doesn’t really want either man to sleep in the bed, but Q invites himself in. Meanwhile, the other trios are pretty much the same, everybody would just like to sleep alone.

The wake up call in the morning was the rain, Ali is close to calling it quits but Jason is holding her together.
The next day, Summer and her team get a reward, a salsa lesson. Jesse just finds it so awkward to have three on date but was happy when Summer asked for a kiss eight in front of Q.

Jenny meets up with the couples and tells everyone that seven men are going home and Summer gets to have her choice of any guy in the 14. Jenny suggests that they all get to know each other before the Couples Choice Ceremony.
At the cabins, Shauna is doing yoga and Ryan is trying his best to keep up with her.

Christian is enjoying time with Tara, they both enjoy dance but two different styles. Tara finds his personality is humorous, but it’s not her thing.

Ken has alone time with Yanina; he tells her that he is a puppy foster parent and shows her a photo album. Yanina is really touched and as they are sitting under a rainbow, she gives him a kiss.

Jenny and Ben are spending time together, they are both getting along as each of them are sarcastic.

Jason doesn’t want to go home, so he tries to connect with Cina but she finds it too little too late.
Chase wants to get know Ali and she is just as interested.

Mike is ready to explore his options, the first woman that caught his eye is Shauna and she is just as attracted to him. When Mike asks for a kiss, Shauna feels awkward and kind of destroys the whole thing because she now thinks he is after only one thing.

The trios will be going up one at a time, the women will have to choose the guy they want and they guy can’t deny her. The other guy will go in an unwanted group.

Summer is first and tells Jenny that they are both good kissers. Because her team arrived first, she gets to pick any guy and she does not chose any one of them because she finds they are both friend material only. With that being said, she picks Tim.

Yanina, Ken & Mike are next and she must choose which one she wants to keep around, it’s Ken because with Mike it’s like brotherly love.

Tara & Leo are next, Tim was stolen so she is not left with a choice.

Cina, Jason E. & Chase are up, they both tried to win her over, but in the end it’s Jason E.

Shauna, Christian & Ryan and she doesn’t waste anytime saying that she wants Ryan.

Jenna, Ben & Frankie, she chooses Ben so they can be sarcastic together.

Ali, Darwin & Jason are last. After a tough night, she chooses Jason.

There is one more surprise, are the unmatched men really going home? The women have one last chance to stay with the partner they choose, or switch them out for one of the guys in the unmatched area.

Yanina stays with Ken. Tara switches, she chooses the guy she didn’t even talk to this whole time, Jessie. Cina keeps her man. Shauna has a decision to make, she decides to stay with Ryan. Jenny stays with Ben. Ali is the last one to choose, she switches it up and chooses Chase.