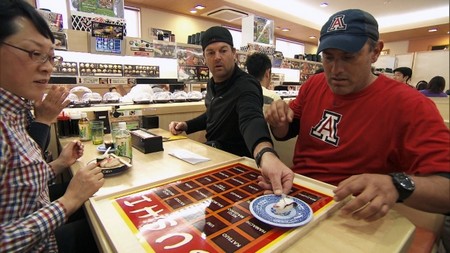 Emmy award winning The Amazing Race 2012 returns tonight to CBS with the final episode titled ‘’It’s a Great Place to Become Millionaires.’    Stand by as we live blog all the up-to-the minute details!

On last week’s episode the race continued in India.  Engaged couple Rachel and Brendon had to decorate an elephant for a local festival then clean up after her in order to receive the next clue. Ralph helped Vanessa who suffers a leg injury during the race.   The last team to arrive at the pit stop last week was Mark & Bopper, and they were eliminated from the race.  If you missed the episode you can read our official recap here.

On tonight’s show the final four Teams battle for the $1 million prize in a grueling two-hour season finale that starts in Japan, where Racers call upon their track skills for an exhausting Japanese game show, and concludes in Hawaii, where Teams hit the waves to put their rescue mission skills to the test.

We will be live blogging ‘It’s a Great Place to Become Millionaires‘ with all the up-to-the-minute details at 8PM EST so make sure to come back to this spot and watch the show with us.   Make sure to refresh often so you get the most current info!  While you wait for our recap check out the sneak peek video of tonight’s show below.

RECAP: Tonight it is down to the final four, which team will finish first and win the amazing race, I hope it is Brendon and Rachel R.

Cochin, India is known as the city of harmony and this is the start of the 11th leg around the world. Rachel and Dave were the first team to arrive in the last leg and will be the first team to depart in this leg, they have to head to the airport and take a flight to Hiroshima, Japan.

All teams are on the same plane headed to Hiroshima, Japan. As the teams arrive, they must now purchase bus tickets, Rachel and Brandon missed the bus and have to take another one. Rachel is very upset with Brandon and tells him that he should have listened to her.

Once teams arrive at their destination, they must purchase train tickets to Mariaja Island. All teams are on the train, except for Dave and Rachel; Rachel R. and Brendon caught up with everyone.

Now the teams have to take a ferry and all the teams are hoping that Rachel and Dave are going to miss it, and they do which makes all the other teams happy because they won six legs.

Rachel and Dave decide to take a few hours sleep since they have to wait till morning. The rest of the teams arrive and find out that their “clue arrives with the rising sun.”

It’s the next morning and all teams get their clue, they must head to the Hiroshima Peace Memorial Park. Once they all arrive there, all teams have a moment to reflect about where they are. Teams must now head to Osaka, Japan to get their next clue.

Vanessa and Ralph are the first team to arrive, having taken a cab – oh no, they are in the wrong place. Art and JJ are actually the first team to arrive and one person must participate in a Japanese game show, “Bring That Chicken Home”. Teams have to hot foot it (on a conveyor belt) to grab three chickens from the ceiling and make it over the finish line. Art is first and JJ is having the time of his life laughing at him as he keeps falling.

Meanwhile, seems like the other teams made the same mistake as Vanessa and Ralph and went to the wrong building. Art finished grabbing his chickens and now they must head to the Umeda Sky Building and locate the Window 7 touch screen tv’s.

Vanessa is the next person to hot foot it and try to grab chickens, she asks Dave, “this isn’t going to kill me is it?”, is she serious?

Brendon is also running to grab his chickens, but has to give up one of them because he dived to catch it. Rachel is doing a great job and finishes just after Brendon. Meanwhile, Vanessa has only grabbed one chicken and is having a melt down. Ralph tells Vanessa that they can stop and take the penalty because it’s not worth it. Vanessa doesn’t give up, she now has two chickens.

Art and JJ are the first team to arrive at the Unmeda Sky Building and face a Detour. They must choose between Sushi and Sumo. In Sushi, it is Bingo and teams have to correctly identify the pieces, if they are correct they have to eat them as well. In Sumo, they have to take two Sumo life size cut outs and get locals, in groups of three, to take a photo and they need ten of them.

Art and JJ, Brendon and Rachel R. have chosen to do the Sushi Detour. Meanwhile, Rachel and Dave are fighting while looking for a cab and Vanessa has grabbed all her chickens and are headed to the Sushi Detour as well.

Rachel and Dave are the only team to do the Sumo cut outs. Art and JJ are having a hard time with the Sushi Bingo when Brendon and Rachel R. walk in. Vanessa and Ralph are still in the cab, they have yet to arrive at the Sushi Bingo. Rachel and Dave are finished taking their photos and get their next clue. Teams must now head to the pit stop at Osaka Castle, the last team will be eliminated.

Art and JJ are finished the Sushi Bingo and they are also heading to the Pit Stop. Brendon and Rachel R. are fighting, while Vanessa and Ralph catch up and arrive to play Bingo.

Rachel and Dave are team number one to arrive at the Pit Stop, they have tied the record for the most wins, seven. They have also won a trip for two to New Zealand.

Art and JJ are the second team to arrive at the Pit Stop. Who is going to be the third team to arrive? Brendon and Rachel R., they will have a chance to compete for the million dollars.

Vanessa and Ralph are the last team to arrive and have been eliminated from the race. Phil tells Vanessa that she should be really proud of herself because she really dug deep.

It is now the start of the 12th leg, Rachel and Dave depart first and must fly to Honolulu, Hawaii and find the Twin Towers, Dave thinks Hawaii is a “great place to become millionaires.” There is only one flight a day going to Honolulu, so all teams are on the same flight for twelve hours to their final destination.

Rachel and Dave are in first place, Art and JJ are following them. Dave tries to convince his cab driver to ditch Art and JJ’s cab, and it works. Rachel and Dave are the fist team to arrive and they must ascend themselves up 45 stories to see their next destination, then rappel down.

Art and JJ ask their cab drive to find a hotel, they want to get on the internet to figure out where they have to go. They stop and ask someone, who sends them to the wrong place. Meanwhile, Rachel and Dave have arrived and they are ascending to the top as well.

Rachel and Dave are now rappelling down, while Rachel and Brendon are almost to the top. Art and JJ have finally asked the right person and are heading to the Twin Towers.

Brendon is almost finished filling their bucket, when Art and JJ arrive.  Brendon and Rachel R. are done and they blew it, they didn’t go on foot, they got into a cab.  They realize their mistake and have to head back.

Rachel and Dave arrive and get their next clue, they must ride a wave runner and rescue a distressed swimmer. Rachel drives and they have no problem getting to and grabbing the guy. Art & JJ are the next team to arrive, while Rachel and Brendon returned and get in the helicopter, but not without fighting.

Rachel and Dave are back at the Finish Line, but this time, they are the first team to arrive and win The Amazing Race, as well, they have the most wins for first place, an amazing eight.